The ZGMF-X10A Freedom Gundam (aka Freedom, X10A) is a mobile suit introduced in the anime Mobile Suit Gundam SEED and is piloted by Kira Yamato.

One of ZAFT's ZGMF-X series of Gundam units build in C.E. 71 using technology derived from the four captured Alliance's Gundam, the Freedom Gundam has Phase Shift Armor and its armaments include CIWS guns, beam sabers, shield, plasma beam cannons, railguns, and a beam rifle. When the latter three weapons are used simultaneously, the Freedom is said to be in 'Full Burst Mode'. The suit has full flight capabilities in the atmosphere and the back-mounted wings can be deployed in "High Mobility Aerial Tactics (HiMAT) Mode" to enhance its mobility in the atmosphere or in space. It also has an advanced targeting system, the Multi Lock-On System, that allows it to target and fire at multiple enemy units simultaneously. Due to its capabilities and loadout, the suit has a reputation as a specialized 'Mobile Suit Killer', but its high performance resulted in a complicated control system that demands extremely fast reaction speed and spatial awareness from its pilot.[1]

When required, the Freedom Gundam can dock with a support unit, the METEOR unit, for heavier firepower and greater speed. The Freedom Gundam has virtually unlimited combat endurance as it is equipped with a Neutron Jammer Canceller and powered by a nuclear reactor. Kira describes the suit as having over four times the power of the GAT-X105 Strike Gundam.[2] However, what this exactly means is unclear. The Freedom Gundam is meant to operate alongside the ZGMF-X09A Justice Gundam, and they are often based on the warship, the FFMH-Y101 Eternal, which is designed specifically to maintain them. Even in CE 73, the suit is still considered by some people, such as Shinn Asuka, as the most powerful mobile suit out there. Overall, it is one of the Clyne Faction's symbols of power, along with the Eternal, the Archangel, and the Justice.

Mounted in the head, the pair of MMI-GAU2 "Picus" 76mm CIWS guns have a high rate of fire but poor penetrating power. Thus, they are mainly used to intercept incoming missiles and enemy units at close range.

A pair of powerful plasma beam cannons located in the wings, they are positioned over the shoulders when in use. Amongst the suit's ranged weaponry, the plasma beam cannon has the highest firepower and longest attack range.

The main close combat weapons of the Freedom are two MA-M01 "Lacerta" beam sabers, which are stored above the railguns. As with the beam rifle, the same type of beam sabers are used by the Justice. Since the beam sabers are powered by the suit's nuclear reactor, they have a higher output than the ones used by the original GAT-X series. The two beam sabers can be combined into a twin-edged beam saber, and this form is known as 'Ambidextrous Halberd'. Kira rarely used the beam sabers in this form.

A pair of railguns that are mounted on the waist, they have an excellent rate of fire and high ammunition capacity. Folded into three parts when not in use, they can be used to deal with situations where beam weapons are ineffective and are the suit's most powerful solid-based weaponry. They are developed based on the Duel Gundam Assault Shroud's "Shiva" railgun. Although the railguns have foldable grips at the sides, they can be fired without the grips being held in hands.

The Freedom uses a MA-M20 "Lupus" high-energy beam rifle, which is the same rifle used by its companion unit, the ZGMF-X09A Justice Gundam. This beam rifle is stronger than the ones used by the original GAT-X series or the ZGMF-600 GuAIZ as it is powered by the suit's nuclear reactor. Can be stored on the rear skirt armor when not in use.

Handheld and/or mounted on the left forearm, Freedom's shield has a laminated armor surface instead of an anti-beam coating like on the shields used by most mobile suits. The same type of shield is also used by the Justice Gundam.

The atmospheric flight configuration of the Freedom Gundam, in which its wings are unfolded for higher maneuverability. The Freedom Gundam is capable of flight even in its normal mode, but this form is better suited for aerial dogfighting. HiMAT mode can also be used in space whereby it enhances the Freedom Gundam's AMBAC capabilities.

As implied by its name, this unique system allows Freedom to target multiple enemies and attack them at once. To use this system effectively, the pilot must have high spatial awareness capability, which is rare even among Coordinators. This system can also be used when Freedom docked with the METEOR unit.

The name of the attack mode in which Freedom uses its beam rifle, railguns and plasma beam cannons all at once. This mode is often used together with the Multi Lock-On System to destroy large numbers of enemy units at once. However, despite its power, Full Burst Mode can only fire in a forward direction.

As with the other four ZGMF-X series of Gundam units produced in that time period, the Freedom is equipped with a Neutron Jammer Canceller, which counters the effects of the ubiquitous Neutron Jammers and allows these suits to be powered by nuclear reactors. This gives them almost limitless combat endurance, even with Phase Shift armor activated.

Like the other four units, the Freedom is equipped with Phase Shift armor. Thanks to its N-Jammer Canceller and nuclear reactor the PS armor is capable of being active for a lot longer than on non-nuclear powered suits such as the Strike.

Like the Justice, the Freedom can dock with the powerful METEOR unit, a large mobile weapons platform with powerful thrusters and an even more powerful armament of battleship-caliber beam cannons, large beam swords, and dozens of heavy missile launchers.

On April 1st, C.E. 71, ZAFT rollout two new mobile suits, the ZGMF-X09A and ZGMF-X10A and they were named "Justice" and "Freedom" respectively by the PLANT Supreme Council Chairman, Patrick Zala. Both machines were part of a series of advanced mobile suits developed based on technology reverse-engineered from the captured Earth Alliance G Project suits.

On May 8th, C.E. 71, the Freedom Gundam was stolen by Kira Yamato, with the help of Lacus Clyne.[2] Kira rushed to Earth with the stolen suit and came to the rescue of the Archangel during the Battle of JOSH-A.[3] Along with the Archangel, Kira defected to the neutral Orb Union[4] and used the Freedom to defend the country during the Battle of Orb. During the battle, he reunited with his old friend Athrun Zala, the pilot of the Justice Gundam, and they soon joined hands to fight against the Earth Alliance's invasion forces, which included three new Gundams, the GAT-X131 Calamity Gundam, the GAT-X252 Forbidden Gundam, and the GAT-X370 Raider Gundam.[5] Later, he returned to space along with the Archangel and the Orb battleship Kusanagi,[6][7] and met up with the support vessel FFMH-Y101 Eternal, which was stolen by Lacus Clyne and her supporters, captained by former ZAFT commander Andrew Waltfeld, and which carried two METEOR units. The three ships then joined forces, becoming the Three Ships Alliance.[8]

During the Battle of Mendel, the Freedom and Justice once again fought the Calamity, Forbidden and Raider.[9] After the three machines temporarily retreated to their mothership, Kira flew the Freedom into the Mendel colony, where he rescued his comrade Mu La Flaga by swiftly disabling Rau Le Creuset's ZGMF-600 GuAIZ.[10] At the battle's climax, the Freedom attempted to retrieve a life pod containing Flay Allster, who had in her possession data on ZAFT's Neutron Jammer Canceller. However, the Freedom was damaged by the Raider when Kira became distracted, and the life pod was recovered by the Calamity.[11]

During the Second Battle of Jachin Due, Athrun and Kira used their METEORs' firepower to thwart an Earth Alliance nuclear missile attack on the PLANTs.[12] Afterward, Kira battled against Rau Le Creuset and his ZGMF-X13A Providence Gundam. The Freedom was quickly overpowered by the Providence's Dragoon System, however Kira still managed to severely damage the Providence and impaled its cockpit with a beam saber, killing Rau. The Providence was then vaporized by the last shot of the GENESIS laser, and the subsequent explosion heavily damaged the Freedom.[13]

After the war, the Freedom was repaired and hidden in a secret underground base in Orb, where it remained for more than two years. It returned to action after an assassination attempt on Lacus. Kira launched in the Freedom and swiftly defeated the assassins' UMF/SSO-3 ASHs.[14] Afterwards, Kira used the Freedom to "kidnap" Cagalli from her wedding and brought her aboard the Archangel before the ship left Orb. Later, the Freedom was used by Kira in two failed attempts to stop the battling between Orb and ZAFT forces during the Battle of Dardanelles[15] and the Battle of Crete.[16] During the Battle of Berlin, the Freedom fought and destroyed the Alliance's GFAS-X1 Destroy Gundam, resulting in the death of its pilot, Stella Loussier.[17]

Shortly thereafter, ZAFT launched an attack against the Archangel called Operation Angel Down. During the battle, the Freedom was stabbed in the abdomen by Shinn Asuka's ZGMF-X56S/α Force Impulse Gundam and its parts fell into the waters below. However, Kira managed to shut off the unit's nuclear reactor before he lost consciousness and successfully prevented a nuclear explosion.[18] His sister, Cagalli Yula Athha, later rescued him and the remaining torso of the Freedom from the waters using her MBF-02 Strike Rouge.[19]

ZAFT developed an advanced version of the Freedom, called the ZGMF-X20A Strike Freedom Gundam, which never progressed past the prototype stage due to technical limitations and the Junius Treaty signed after the first war. In C.E. 73, either the incomplete unit or its plans (it is unknown which) was stolen by the independent faction Terminal, who then modified the suit into a personal unit for Kira, who piloted it after the Freedom was destroyed.[20] 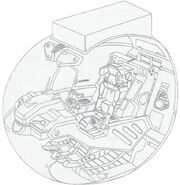 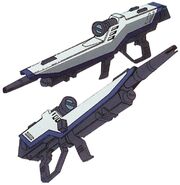 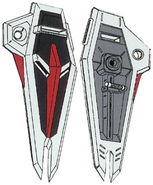 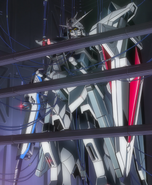 Close up of MA-M20 "Lupus" Beam Rifle (Into the Dawn Skies, HD Remastered)

Reaching out (Into the Dawn Skies, HD Remastered)

Holding onto Justice Gundam (Into the Dawn Skies, HD Remastered)

Vs Calamity Gundam (A Place for the Soul, HD Remastered)

Technical Data (1) (A Place for the Soul, HD Remastered)

Technical Data (2) (A Place for the Soul, HD Remastered)

Technical Data (3) (A Place for the Soul, HD Remastered)

Charging ahead (To a Future that Never Ends, HD Remastered)

Wreckage (To a Future that Never Ends, HD Remastered)

Defending with Laminated Anti-beam Shield (The Shadows of War) 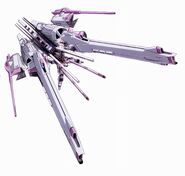 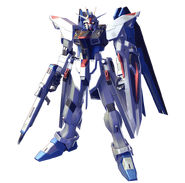 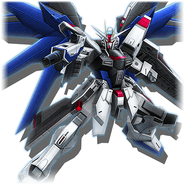 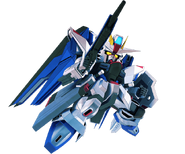 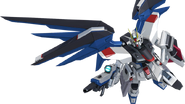 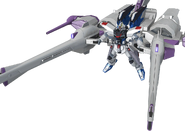 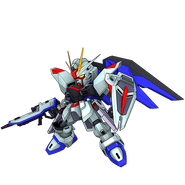 In Arcade Mode with Kira

First drop on stage, with Gundam Virtue as partner 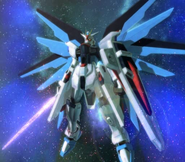 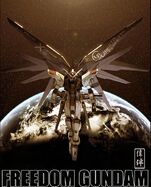 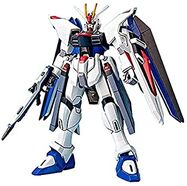 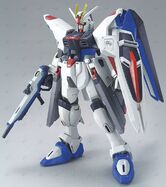 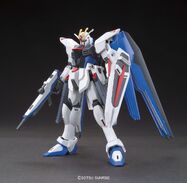 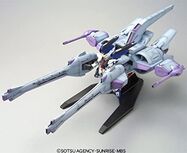 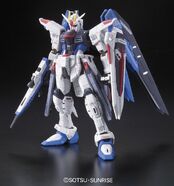 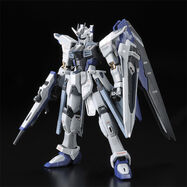 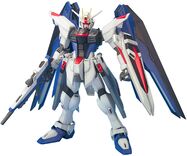 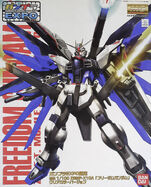 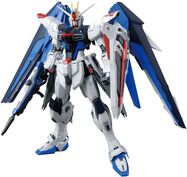 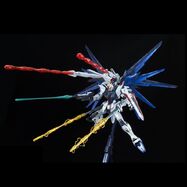 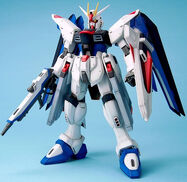 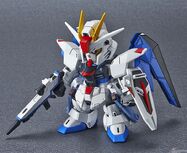 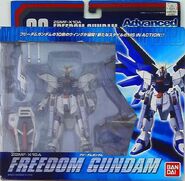 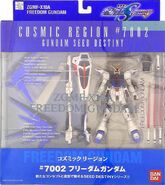 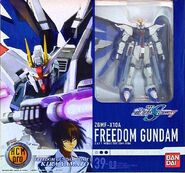 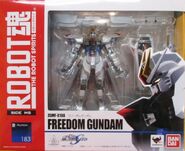