The ZGMF-X10A-A Amazing Strike Freedom Gundam is a Gunpla built for the 8th World Tournament by Meijin Kawaguchi. Allan Adams, a former engineer of PPSE, assisted in its creation. Using the ZGMF-X20A Strike Freedom Gundam as the base, Meijin Kawaguchi liked the ability to mount multiple armaments and the machine's versatile performance at long and short ranges. He took full advantage of its powerful combat abilities while re-engineering the layout to make it easier for him to pilot.

The result was a top-level Gunpla that excelled against any foe, and its design fuses the strongest aspects of Meijin Kawaguchi's previous Gunpla: the RX-93-ν2V Hi-ν Gundam Vrabe's remote weaponry, PPMS-18E Kämpfer Amazing's binders that allow switching out of weaponry in response to the battle situation, and the PPGN-001 Gundam Amazing Exia's high performance and multi-weaponry, all into one. It also boasted overwhelming speed, as befitting Tatsuya's Crimson Comet title. However, the Meijin Kawaguchi was never satisfied, and constantly worked on improvements to the Gunpla.

The Amazing Strike Freedom's beam rifle is equipped with dual left-right Vrabe DRAGOONs, and can be fired simultaneously with the two DRAGOONs for greater destructive effect. When used alone, its firepower is reduced but rate of fire increased.

The Strike Freedom Gundam's dual beam rifles have been modified into dual beam cannons and mounted on the back. This leaves the arms free to use other weapons.

An electromagnetic, long-range projectile weapon, the Amazing Strike Freedom is equipped with a pair of them. The railguns are foldable and stowed on its waist.

The Amazing Strike Freedom is equipped with a total of eight Vrabe DRAGOONs, two on the beam rifle, and six on the DRAGOON Weapon Binder. A modified version of the Strike Freedom Gundam's Super DRAGOON for ease-of-use, the Vrabe DRAGOONs can form particle fields to boost the power of beam weapons, among other functions.

A section of the DRAGOON Weapon Binder can be detached and mounted on the arms to serve as a pair of large shields. A dual offensive/defensive armament, it also boosts particle control. Each shield has two Vrabe DRAGOONs.

A pair of beam sabers is stored on the rear skirt armor.

The Strike Freedom's arms layout is dramatically overhauled, with the best example being the back-mounted DRAGOON Weapon Binder. Modifications reduce particle resistance during high-speed movement to the absolute minimum, and use range-of-motion (including the motions of the mounted Vrabe DRAGOONs) to boost aerial maneuverability. The DRAGOON System itself also contributes to overall thrust, but thrust balance changes dramatically when the Vrabe DRAGOONs are launched. Tatsuya is the only one capable of piloting the machine in these circumstances. Although a DRAGOON platform, it was conceived to handle other weapon systems as well, such as the Hi-ν Gundam Vrabe's funnels.

A deadly attack in which multiple weapons ― beam cannons, Vrabe DRAGOONs, railguns and beam rifle ― are fired simultaneously. The attack can hit multiple units or deliver concentrated fire on a single target.

The Amazing Strike Freedom is the gunpla Meijin Kawaguchi used in the 8th World Championship. 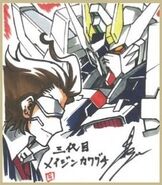 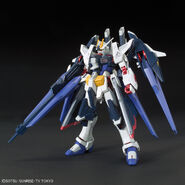 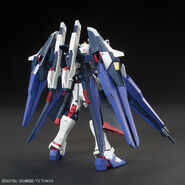 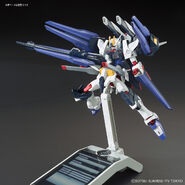 Retrieved from "https://gundam.fandom.com/wiki/ZGMF-X10A-A_Amazing_Strike_Freedom_Gundam?oldid=426798"
Community content is available under CC-BY-SA unless otherwise noted.