A ZAKU Series unit designed to serve as a testbed for experimental design features used in later Gundam-type mobile suits. The ZAKU Splendor is used for testing the Core Splendor cockpit system later utilized on the ZGMF-X56S Impulse Gundam and the Deuterion Beam Energy Transfer System. As a result, it is made of three modules (the Chest Flyer, Leg Flyer and the Prototype Core Splendor) similar to the Impulse Gundam, and has the receivers for the energy transfer system installed in its head. The armament of the ZAKU Splendor consists of four hip-mounted grenades similar to the ones used on the standard ZAKU units as well as two shoulder shields, similar to the ones used on the ZGMF-1001 ZAKU Phantom. Besides these fixed armaments, the ZAKU Splendor can also use two types of beam rifles and a sword for close combat.

The ZAKU Splendor has two shoulder shields like the ZAKU Phantom but the spikes have been removed, instead each shield has two fins near the top edge. These fins improve the flight capabilities of the chest flyer, helping it exceed the developers' expectations.

For close combat, the ZAKU Splendor is equipped with a physical sword.

A test version of the Impulse Gundam's Core Splendor. It cannot transform into a plane form like the Impulse's and has inferior flight performance, but it is still sufficient for testing the concept.

A wireless energy transfer system for recharging a mobile suit's battery, this system was first tested on the ZAKU Splendor in order to gauge its strengths and weaknesses. Unlike the system later used by the Second Stage Series MS, the ZAKU Splendor has two energy receivers on its head.

Built before the Impulse Gundam, the ZAKU Splendor was developed for testing the Core Splendor system and the Deuterion Beam Energy Transfer System. The satisfactory results gained from the tests allowed for the successful development of the Impulse Gundam. Two units were built in total, one was destroyed during testing while the other survived and was afterwards stored in an unknown location. 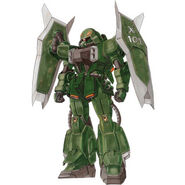 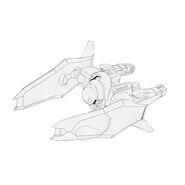 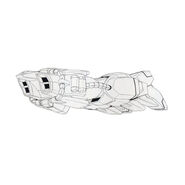