The ZGMF-X09A Justice Gundam is a mobile suit introduced in Mobile Suit Gundam SEED and it is piloted by Athrun Zala.

One of ZAFT's five ZGMF-X Gundam units produced in CE 71 using technology derived from the four captured Alliance's Gundam, the Justice Gundam's main feature is the Fatum-00 unit on its back.[1] This complex armament unit normally serves as the main thrusters, granting overwhelming acceleration as well as mobility when deployed horizontally and this configuration is also known as 'High-Mobility Aerial Tactics (HiMAT) Mode'.[1] It also grants flight capabilities in the atmosphere and can be deployed as a separate unmanned unit or a subflight unit. It is armed with beam cannons and machine guns.

Other weapons of the Justice included beam sabers, beam rifle, shield, beam boomerangs and head-mounted CIWS guns. In comparison to the other ZGMF-X Gundam units, the Justice's armament is relatively simple and pales in firepower compared to its sibling, the ZGMF-X10A Freedom Gundam.[1] However, the Justice's true value lies in its incredible mobility and the various tactics it can employ using the Fatum-00.[1] It can also dock with a support unit, the METEOR unit, for heavier firepower and greater speed, and has an advanced targeting system, the Multi Lock-On System, which allows it to fire at multiple enemy units simultaneously.

Justice also has a tall sensor spine on the top of its head, similar to that of the GAT-X303 Aegis Gundam, and this enhances its ability to collect information in the battlefield. It is designed to be operated alongside the Freedom and for this purpose, the warship Eternal is designed specifically to maintain both suits. Like the four other ZGMF-X Gundam units, Justice is armored with Phase Shift Armor and has virtually unlimited combat endurance as it is powered by a nuclear reactor thanks to the Neutron Jammer Canceller.

Mounted in the head, two on each side, these small-caliber guns have a rapid rate of fire, and are effective in restraining the enemy's movement and in close combat.[1]

Like the Freedom, the Justice uses a MA-M20 "Lupus" beam rifle, which is stronger than the ones used by the original GAT-X series or the ZGMF-600 GuAIZ as it is powered by the suit's nuclear reactor. Can be stored on the rear skirt armor when not in use.

Like its sister unit, the ZGMF-X10A Freedom Gundam, the Justice's main close combat weapons are two MA-M01 "Lacerta" beam sabers stored on the side skirt armor. As the beam sabers are powered by the suit's nuclear reactor, they have higher output than those used by the original GAT-X series. The two beam sabers can be combined into a twin-edged beam saber, and this form is known as 'Ambidextrous Halberd'. Athrun is usually seen using the beam sabers in this form.

Handheld and/or mounted on the left forearm, Justice's shield has a laminated armor surface instead of an anti-beam coating like on the shields used by most mobile suits. The same type of shield is also used by the Freedom.

Main weapon of the Fatum-00, the pair of "Fortis" beam cannons are mounted at the front and has an excellent rate of fire.

Mounted above the Fatum-00's engine blocks, the pair of "Cervus" turret machine guns can rotate 360 degree to fire at enemy units.[1] They are mainly used to shoot down incoming missiles or close enemy units, especially when the Fatum-00 is used as a separate support unit.

Mounted between the Fatum-00's engine blocks and beam cannons, the four "Volucris" machine guns can fire exploding bullets and armor-piercing bullets.[1] They are mainly used to shoot down incoming missiles or close enemy units, especially when the Fatum-00 is used as a separate support unit.

The most unique feature of the Justice is the Fatum-00 unit on its back. When deployed horizontally, it allows the Justice Gundam to enter 'High Mobility Aerial Tactics (HiMAT) Mode' for higher acceleration and mobility.[1] It is also detachable and capable of functioning independently due to its AI system or be remoted controlled. In this form, it either serve as an unmanned support unit or as a subflight unit, like the Guul, for Justice Gundam or other mobile suits.[1] As an unmanned unit, it is used alongside the Justice Gundam in a variety of manner, and can even be launched at enemy unit as a guided missile.[1] The Fatum-00 mounts two MA-4B "Fortis" beam cannons, two M9M9 "Cervus" turret machine guns and four GAU5 "Volucris" machine guns. All of these weapons are usable regardless of whether the Fatum-00 is attached or detached from Justice. These weapons can also be used by other mobile suits riding on the Fatum-00.[1]

As with the other four ZGMF-X series of Gundam units produced then, the Justice is equipped with a Neutron Jammer Canceller, which counters the effects of the ubiquitous Neutron Jammers and allows these suits to be powered by nuclear reactors. This gives them almost limitless combat endurance, even with Phase Shift armor activated.

Like the other four units, the Justice is equipped with Phase Shift armor. Thanks to its N-Jammer Canceller and nuclear reactor the PS armor is capable of being active for a lot longer than on non-nuclear powered suits such as the Aegis.

As its name suggest, this system allows Justice to lock on to multiple targets and carry out en masse firing. Athrun uses this system only when Justice is docked with the METEOR unit.

Like the Freedom, the Justice can dock with the powerful METEOR unit, a large mobile weapons platform with powerful thrusters and an even more powerful armament of battleship-caliber beam cannons, large beam swords, and dozens of heavy missile launchers.

On April 1st, C.E. 71, ZAFT rollout two new mobile suits, the ZGMF-X09A and ZGMF-X10A and they were named "Justice" and "Freedom" respectively by the PLANT Supreme Council Chairman, Patrick Zala. Both machines were part of a series of advanced mobile suits developed based on technology reverse-engineered from the captured Earth Alliance G Project suits. Most of the Justice's and Freedom's weapon systems were tested on the YFX-600R GuAIZ Experimental Firearms Type.

More than a month later, on May 17th, C.E. 71, Athrun Zala, former pilot of the GAT-X303 Aegis Gundam, was assigned the Justice with the mission to either recapture or destroy the stolen Freedom.[2] Instead, Athrun joins forces with the Freedom's pilot, his old friend Kira Yamato, in defending the neutral nation of Orb Union from Earth Alliance's attacks.[3] Later, Athrun met up with the support vessel FFMH-Y101 Eternal, which carried two METEOR units.

Athrun and Kira used the METEORs' firepower to thwart an Earth Alliance nuclear missile attack on the PLANTs on the final day of the war, and Athrun also destroyed the GAT-X131 Calamity Gundam with his METEOR's beam sword.[4] Afterward, Athrun flew the Justice inside the gamma ray laser GENESIS and activated the Gundam's self destruct system, preventing his father's doomsday weapon from firing on the Earth.[5] Two years later, the Justice's successor, the ZGMF-X19A Infinite Justice Gundam was built and again piloted by Athrun.[6] 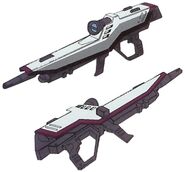 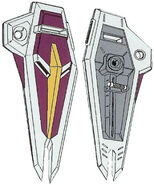 Close up (Deactivate mode) (In the Name of Justice, HD Remastered)

Nuclear reactor (In the Name of Justice, HD Remastered)

Eyes glowing upon activation (In the Name of Justice, HD Remastered)

First launch (In the Name of Justice, HD Remastered)

With Freedom Gundam (Into the Dawn Skies, HD Remastered)

Holding Laminated Anti-beam Shield in front (What Stands in the Way, HD Remastered)

Technical Data (1) (A Place for the Soul, HD Remastered)

Technical Data (2) (A Place for the Soul, HD Remastered)

Technical Data (3) (A Place for the Soul, HD Remastered)

Charging with Aile Strike Rouge and M1 Astray (To a Future that Never Ends, HD Remastered)

Inside of GENESIS (rear, without Fatum-00) (To a Future that Never Ends, HD Remastered)

Self-destruct in GENSIS (To a Future that Never Ends, HD Remastered)

Armed with beam rife and shield 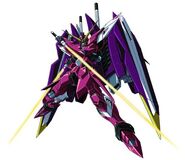 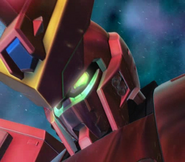 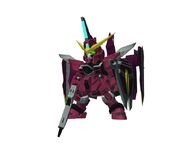 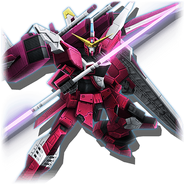 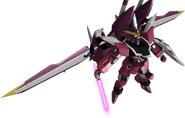 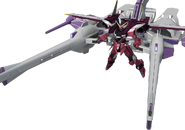 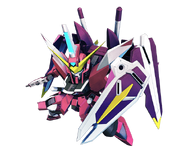 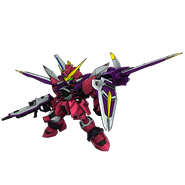 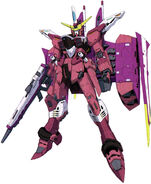 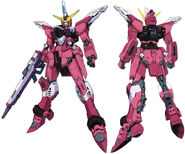 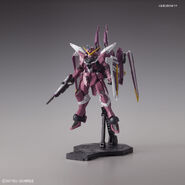 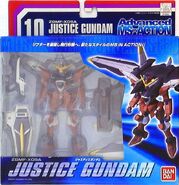 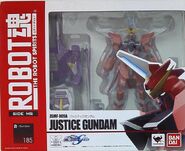