A variation of the ZGMF-1017 GINN designed for space-based reconnaissance, the Long Range Reconnaissance Type was equipped with two sensor domes on its shoulders and an enhanced sensor array on its head, greatly improving its enemy search capabilities. Since it was intended to stay near an enemy position for an extended period of time, its cruise range was longer than the standard GINN's.[1][2] It was given a dark gray paint scheme to lower its visibility.[3]

The Long Range Reconnaissance Type featured a two-seater cockpit: a pilot responsible for controlling the mobile suit and a co-pilot who focuses on gathering intelligence.[1][2] This design reduces the strain placed on the pilots during long missions. Due to its electronics equipment, as well as the extra cost for pilot training, the operation cost of the Long Range Reconnaissance Type was far greater than that of the standard GINN.[3]

Also known as "Custom Sniper Rifle", it is capable of long-range sniping,[1] but its firepower was incredibly weak, incapable of destroying even a MAW-01 Mistral with a direct hit.[4][5]

In place of the sniper rifle, the GINN Long Range Reconnaissance Type can also use the standard GINN's heavy assault machine gun. This weapon is magazine-fed and has two firing modes, semi-auto and full-auto.

During the First Alliance-PLANT War, ZAFT created several variants of its mainstay unit, the ZGMF-1017 GINN, to cope with different situations. One such variant is the GINN Long Range Reconnaissance Type, which is used for search and recon missions in space.

Though the GINN had already become obsolete by C.E. 73, the GINN Long Range Reconnaissance Type remained in service due to its unique capabilities.[3] One unit was responsible for discovering the OMNI Enforcer nuclear attack force targeting Aprilius One.[6] During the Second Alliance-PLANT War, another unit followed Martin DaCosta to the FFMH-Y101 Eternal.[7]

Examining the Silverwind (The Scar of Space, HD Remastered)

Close up (The Scar of Space, HD Remastered)

Head close up (Kira of the Skies, HD Remastered) 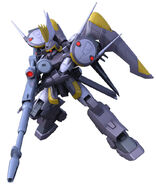