The successor of the ZGMF-600 GuAIZ, the GuAIZ R's armament consists of a pair of hip-mounted railguns, which replace the extensional arrestors, a new composite shield, two head-mounted CIWS, and a beam rifle. The latter two weapons are the same as those used by GuAIZ. Besides the change in armament, the thrusters at the sides of the GuAIZ's backpack were also removed and replaced by additional thrusters on the new rear skirt. These changes made to the GuAIZ R greatly improved its combat performance while also managing to maintain the suit's ease of production.

Like the GuAIZ, the GuAIZ R features 2 "Picus" 76mm CIWS guns mounted in the head. These light projectile weapons are used to shoot down incoming missiles and enemy units at close range.

Replacing the unpopular extensional arrestors of the original GuAIZ are foldable, waist-mounted railguns similar to those found on the YFX-600R GuAIZ Experimental Firearms Type. The pair of railguns helps to improve the suit's mid-range firepower.

The same handheld Beam Rifle as used by the previous GuAIZ, it is the standard ranged weapon of the Guaiz R. Powered by the suit's battery, the weapon is developed by Maius Military Industries based on the data from the GAT-X units and can easily destroy conventional armor with one shot. It is effective enough to destroy Earth Alliance warship with a handful of shots, but is mostly ineffective against armor that has anti-beam treatment.

Mounted on the left forearm or handheld, the anti-beam coated Composite Shield allows the GuAIZ R to quickly switch between defense and close-quarter combat. Unlike the one used by the original GuAIZ, GuAIZ R's shield has a different design and emits a beam saber instead of dual beam claws. It is similar to the MA-MV04 Composite Armed Shield System of the YMF-X000A Dreadnought Gundam.

After the end of the First Alliance-PLANT War, ZAFT developed an improved version of the GuAIZ - the GuAIZ R. By the second half of CE 73, they were being slowly replaced by the more powerful and versatile ZAKU series. Since this replacement took some time, many GuAIZ Rs were still used in the Second Alliance-PLANT War.[1][2]

Two GuAIZ Rs were assigned to the ZAFT battleship Minerva. During the battle with the Phantom Pain ship Girty Lue, they were caught off guard by the three stolen ZAFT prototypes and easily destroyed.[3] Later, several GuAIZ Rs fought and fared poorly against the GINN High Maneuver Type IIs piloted by renegade ZAFT veteran who were dropping a large fragment of the destroyed Junius Seven colony on earth.[4] 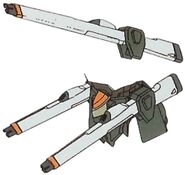 Undergoing maintenance (Those Who Call For War, HD Remastered)

Rear (The End of the World, HD Remastered)