The successor to the ZGMF-1017 GINN and the ZGMF-515 CGUE, the GuAIZ was jointly developed by the Maius Military Industries and the Integrated Design Bureau, which was formed from the merger of all of PLANT's military design bureaus (Heinlein, Asimov, Clarke, and Verne) during this mobile suit's development process.[1][2][3] The GuAIZ inherited the high versatility of its predecessors while also featuring a enlarged form and enhanced armor. It had a new high thrust backpack designed to enhance its mobility in space, though it was also capable of operating on Earth and in colonies. Its head-mounted sensor array was enlarged, enhancing its radar performance. It also featured a pair of head-mounted close defense machine guns, a first among ZAFT mobile suits.[1]

The GuAIZ has two "Picus" 76mm CIWS guns mounted in its head. These light projectile weapons are used to shoot down incoming missiles and enemy units at close range. The addition of these weapons was influenced by the GAT-X series.[4]

Originally a standard shield, its design was altered after the capture of the GAT-X series.[3] The Composite Shield was based on the "Trikeros" Offensive Shield System used by the GAT-X207 Blitz Gundam and was mounted on the left forearm.[5] It featured two beam claws for close combat against mobile suits, allowing the GuAIZ to quickly switch between defense and attack after closing the distance with the enemy.[1][5][6]

A pair of waist-mounted rocket anchors equipped with small caliber beam cannons.[1] Additionally, a beam pick can be generated from the muzzle of the beam cannon.[4][6][7] Each Extensional Arrestor is also connected to the suit's backpack via a cable and can be launched to strike enemy unit tens of meters away.[1] It is a type of hidden weapon and is difficult to master.[4] The Extensional Arrestor was likely based on the Piercer Lock "Gleipnir" used by the Blitz Gundam.[5]

Developed by Maius Military Industries based on the data from the GAT-X units, as well as data collected from the YFX-200 CGUE DEEP Arms, this beam rifle draws power from the GuAIZ's generator.[1][8] It was of the same series as the MA-M20 "Lupus" Beam Rifle used by the ZGMF-X10A Freedom Gundam and the ZGMF-X09A Justice Gundam, though its power was inferior.[5]

One of ZAFT's second phase series mobile suits, the GuAIZ was unveiled on January 23, C.E. 71,[9] on the same day as the fall of the Kaohsiung space port, as part of a propaganda effort.[3] By this point, the basic development of the GuAIZ was already complete.[4] However, merely two days later, Rau Le Creuset's team captured four of the OMNI Enforcer's GAT-X series prototype mobile suits from Heliopolis.[9] The new technology found on the GAT-X series and the realization that the OMNI Enforcer now has its own mobile suits caused the GuAIZ's development roadmap to be drastically altered as ZAFT incorporated new technology into its design, greatly delaying its deployment.[4]

One early production GuAIZ was assigned to Rau in July, C.E. 71. This unit battled Mu La Flaga's GAT-X105+AQM/E-X03 Launcher Strike Gundam at the Battle of Mendel on July 12, but was heavily damaged by the ZGMF-X10A Freedom Gundam.[10][9][4] The GuAIZ would not see general deployment until September 23, C.E. 71,[9] making its combat debut at the Battle of Boaz.[7][4] During the battle, they demonstrated their superiority over the GAT-01 Strike Dagger, the OMNI Enforcer's mass production mobile suit.[4] However, this proved to be moot, as the fortress was soon destroyed by a nuclear attack.[7] Later, numerous GuAIZ participated in the Second Battle of Jachin Due, the final battle of the war, but they once again failed to achieve any significant battle results.[11][12][1] After the war ended, a more powerful version of the GuAIZ, the ZGMF-601R GuAIZ R, was created.[13] 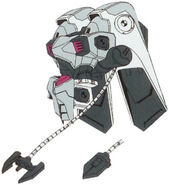 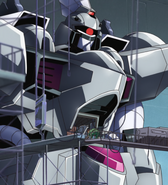 A group of GuAIZ heading into battle (The Nightmare Reborn, HD Remastered)

Near a damaged Nazca-class (The Final Light, HD Remastered)

Engaging in battle (To a Future that Never Ends, HD Remastered)

After the final battle (SEED Destiny Final Plus) 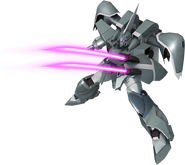 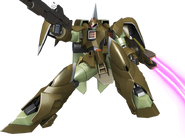 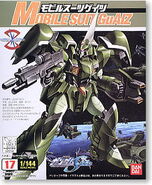