The ZGMF-515AS CGUE Assault is a Mobile Suit in the Cosmic Era timeline. It is featured in the manga series Mobile Suit Gundam SEED Frame Astrays and piloted by Xist Elwes.

Like the ZGMF-1017AS GINN Assault Type, the CGUE Assault mounts additional armor on its arms, legs, chest and backpack to increase overall performance. This set of 'Assault Shroud' armor also grants excellent atmospheric flight capabilities and is designed to allow ZGMF-515 CGUE's performance to be on par with specially developed ace-use MS. Unlike the GINN's, the CGUE's Assault Shroud does not mount any additional weaponry, but the added chest armor improves heat dissipation in addition to providing better protection. Despite its benefits, the Assault Shroud soon falls out of favor as the MS development trend tilts towards ace-use MS and only a limited set of armor were produced. One CCUE Assault is captured by EA and assigned to Xist Elwes. Besides some modifications to the internal components, EA also developed a set of shoulder shield for Xist's unit to increase its combat capabilities.

An improved version of GINN's heavy blade and the standard close range armament of the GGUE.

A shield with a built-in vulcan cannon to improve the CGUE's close combat capability and to allow it to switch between offense and defense quickly. CGUE Assault can be equipped with two of them, one on each forearm for additional firepower.

An improved version of GINN's machine Gun. It fires a type of armor piercing round designated "APSV," this round is extraordinarily powerful, but is incapable of dealing significant damage to enemies protected by Phase Shift armor. This machine gun is also used by AMF-101 DINN and its variants.

An optional pair of shields developed specifically for Xist's Assault CGUE. Each shield features two Gatling guns for heavy firepower and can increase the MS's aerial mobility as well as AMBAC capabilities.

A custom colored CGUE is used by Xist Elwes. Xist's CGUE is a captured unit and modified for his custom use. Xist dislikes the Assault Shroud as he turns into a robotic-like killing machine when using it. As a result, the equipment is sealed away and only used by Xist when he is desperate. In the manga, Frame Astrays, the CGUE Assault was first seen when Xist fought against Suu's ZGMF-1000 Kerberos ZAKU Warrior. 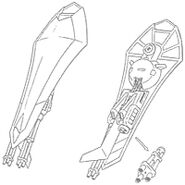