The ZGMF-2000 GOUF Ignited is a mobile suit introduced in the anime series Mobile Suit Gundam SEED Destiny. Its most notable pilots are ZAFT ace pilots Heine Westenfluss and Yzak Jule. GOUF is an acronym for "Guardian Of Unity Forerunner".

Unlike the ZAKU series, GOUF Ignited does not utilize Wizard System and is instead equipped with a flight pack, granting it higher mobility and flight capabilities comparable to the AMF-101 DINN. The suit has both close and ranged combat armaments, but excels particularly in close combat. It is armed with 4-barrel beam guns mounted on its forearms, along with multi-purpose heat rods. In addition, a shield storing a double-edged beam sword can be mounted on its arm and some of the suits have also been seen carrying the 500mm recoilless rifle.

The most versatile weapon of the GOUF Ignited are its two flexible MA-M757 "Slayer Whip" heat rods, one is stored inside each forearm. These rods can be used to whip a target and at the same time deliver an electric charge, causing great pain to the pilot. When the charge is delivered while the heat rod is wrapped around an object, the shock can cause the object to explode. The rod can also heat up via high frequency vibration to such a degree that it can slice lightly armored suits in half.

For ranged combat, each forearm of the GOUF Ignited mounts a single M181SE "Draupnir" 4-barrel beam gun. Although it has a short firing range, it can fire a dense barrage of beams that can damage or even destroy a battleship.

For defense, an anti-beam coated physical shield can be mounted on the left forearm or handheld. The shield also stores the MMI-558 "Tempest" Beam Sword.

A composite weapon that combines a beam sword with a physical sword, the MMI-558 "Tempest" beam sword is stored in the shield. When used, the sword slides out of the shield, extends to its full length and energy blades are emitted on each side.

Initially used by the ZGMF-1017 GINN, it is similar in design to a bazooka, and can fire various types of rounds depending to the magazine used. It is used by GOUF Ignited when heavier firepower is required.

Developed as a part of ZAFT's New Millenium Series of next-generation mass production MS, the GOUF Ignited's inital design was rejected in favor of the ZAKU series. However, the design's high performance saved it from being cancelled and its development was allowed to continue. Later, a handful of prototype version of the improved GOUF Ignited (which was the current ZGMF-X2000 GOUF Ignited) were deployed in battle. The GOUF Ignited piloted by FAITH's ace Heine Westenfluss and painted in his personal color was one such unit. Heine and his GOUF Ignited were assigned to the Minerva shortly after of the Battle of the Gulnahan Ravine. It was destroyed afterwards by Stella Loussier's ZGMF-X88S Gaia Gundam, killing Heine in the process during a 3-way battle between the Minerva, the Earth Alliance and its allies from the Orb Union and the Archangel crew, who tried to prevent this battle.[1]

When it became clear to ZAFT that the ZAKU series was not sufficient to meet combat needs by itself anymore, the GOUF Ignited was put into production to supplement them. It was given a blue paint scheme and designated ZGMF-2000 GOUF Ignited. One such GOUF Ignited was stolen by Athrun Zala and Meyrin Hawke in their attempt to defect from ZAFT, but they were shot down by Shinn Asuka's ZGMF-X42S Destiny Gundam.[2] Several GOUF Igniteds and ZAKUs accompanied a trio of Nazca-class ships in pursuing the FFMH-Y101 Eternal after seeing its suspicious movements. Their attacks on the ship were eventually stopped following the appearance of the ZGMF-X20A Strike Freedom Gundam.[3] During the ZAFT's invasion of Orb, a GOUF Ignited was shot down by a MVF-M11C Murasame and landed on top of Yuna Roma Seiran, killing him. A custom white and grey colored unit is later piloted by Yzak Jule during the assault on the Requiem super weapon, and the battles of Daedalus and Messiah.[4] 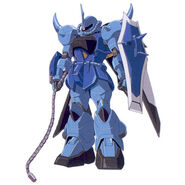 Heine Custom using its Shield to block a Beam Saber (The Shadows of War, HD Remastered) 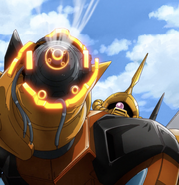 Heine Custom sliced in half by Gaia Gundam's Beam Blade (The Shadows of War, HD Remastered)

In hangar (Athrun on the Run, HD Remastered)

Operating in space (Kira of the Skies, HD Remastered)

Head close up (Kira of the Skies, HD Remastered)

Wreckage of a GOUF Ignited with custom markings after the Battle of Messiah (The Final Power, HD Remastered) 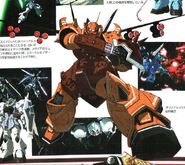 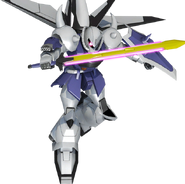 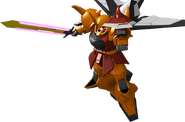 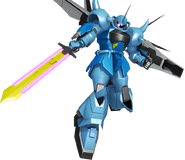 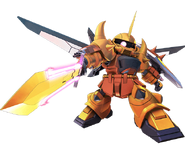