The ZGMF-1017 Works GINN is a Mobile Suit in the Gundam SEED Astray series.

Created by the Junk Guild from discarded ZGMF-1017 GINN, the Works GINN's design emphasized its abilities as a work-use machine. There is no standardized design for Works GINN, although the mobile suit is often seen with a miniaturized backpack, a winch on the crotch, a different manipulator on the left arm, etc. At least one Works GINN seen working on Gigafloat platform has its legs replaced by tank treads. Although the Works GINN was not designed for fighting, it could use handheld weapons such as the linear gun when needed.

A modified version of the linear gun equipped on the TS-MA2 Moebius, it has been reconfigured to an handheld weapon for MS use.

A towing winch is installed on the Works GINN's crotch to tow objects around.

The ZGMF-1017 GINN was the first mass-produced mobile suit created by ZAFT to be used in the First Alliance-PLANT War. Over time, a large number of variants of the standard model are created to be used in different situations. Although most of them are combat models, there are some which are used for non-combat roles. The Works GINN is one such unit, and it was meant for work purposes. Created by the Junk Guild, the Works GINN is popular among civilians.

One known Works GINN is piloted by Junk Guild member Liam Garfield. Although he tries to stay out of combat, Liam is forced to use his Works GINN in battle when he and his comrades decided to protect the neutral colony Litilia, on which his brother lived. The colony decided to leave the Earth Sphere for Jupiter but to prevent this from happening, the Earth Alliance attacked it. Liam thus picked up a linear gun and fought against the attackers. With the introduction of the more advanced MWF-JG71 Raysta and the MWF-JG73 Civilian Astray JG Custom later, the Works GINN starts to lose its usefulness for the Junk Guild. 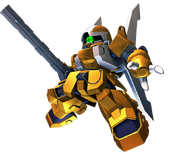