A customized ZGMF-1017 GINN piloted by Miguel Aiman, it is painted in his personal orange color scheme. In the early stages of the First Alliance-PLANT War, the ZGMF-515 CGUE could not be supplied in sufficient numbers to the frontline due to production issues, so ace pilots were given priority to deploy GINN tuned up with high-precision parts. This machine is one of them, and its performance has been further improved by the "DEFRÖCK", a group of volunteers dedicated to Miguel, with enhanced thrusters and sensors. Its specifications have been improved by about 20% compared to the standard GINN.

The same double-edged physical blade as used by the standard GINN. It was developed by Martius Arsenals using the same molecular processing technology as the outer armor of the Laurasia-class. Its blade has incredible toughness, and can easily cleave an Earth Alliance mobile armor in half. When not in use, it is stored on the left side skirt armor.

A ballistic machine gun developed by Maius Military Industry, the 76mm heavy machine gun is the standard equipment of the GINN (including Miguel's custom unit), since it can take full advantage of the mobile suit's high mobility. It has two firing modes: semi-auto (for precision firing) and full-auto (for rapid firing). It is most suited for mid-range combat. Its standard ammunition is high velocity armor piercing (HVAP) rounds. It is stored on the rear skirt armor when not in use.

A shield with Miguel's personal mark drawn on it. This shield is a custom armament not equipped by the standard GINN.

The same D-Type weapon as used by the standard GINN, it is a pair of missile pods each containing three missiles. When used in conjunction with the GINN's radar, it is capable of limited target tracking. Though an attachment allowing it to be hand-carried was developed in parallel, it was mostly mounted on hardpoints on the legs, since doing so frees the GINN's hands to carry other weapons.

In January C.E. 71, Miguel was among the crew of the Nazca-class Vesalius sent out to investigate the culprit behind the destruction of several ZAFT supply bases. Eventually it was revealed that Serpent Tail leader Gai Murakumo was behind the attacks. This led to a battle between Miguel in his custom GINN and Gai in his custom GINN. Due to the damage that Miguel's GINN suffered in this battle, Miguel was was forced to use a standard GINN when he was selected as part of the ZAFT's team to infiltrate the neutral Orb Union colony Heliopolis to capture the prototype mobile suits developed by the Earth Alliance. What happened to Miguel's GINN after his death is unknown. 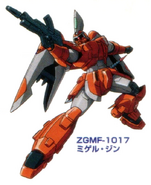 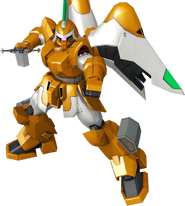