A modified ZGMF-1017 GINN used by Gai Murakumo, leader of the mercenary unit Serpent Tail, on a mission to destroy a series of ZAFT supply bases. Before owning the MBF-P03 Gundam Astray Blue Frame, Gai used to procure and dispose of machines like this one, depending on the mission. To enhance the GINN's mobility, additional thrusters are installed on its legs, and the armor on various body parts have been lighten through the use of slits. Two large propellant tanks are added to the back to extend the machine's range, allowing it to travel vast distances without a carrier ship. This enables the mobile suit to conduct hit-and-run attacks on the supply bases without alerting the enemy to the location of Serpent Tail's mothership.

Additionally, the fin-shaped sensor array on the head of a standard GINN has been removed, replaced by a second mono-eye sensor to expand the field of vision. Destroying the supply bases requires heavy firepower, so this mobile suit is equipped with the "Cattus" 500mm Recoilless Rifle as its main weapon. Unfortunately, this modified GINN's lighter armor makes it unsuitable for anti-mobile suit combat and it has to rely on its speed and mobility to avoid attacks from other mobile suits. For unavoidable close combat or self-defense, Gai relies on a pair of "Armor Schneider" combat knives stored on the shoulders.

Two combat knives made of super-hard metal are mounted on both shoulders. Despite having the same name, these knives have a different design from the ones used by GAT-X105 Strike Gundam.

The same large bazooka-type weapon as used by the standard GINN, it is most suited for anti-ship combat due to its destructive but slow bullet. The weapon is fed by a box magazine mounted on the top, allowing it to reload or switch to other types of ammunition quickly.

In mid-January of C.E. 71, Gai Murakumo was hired to destroy a series of ZAFT supply depots in space. Using this machine specifically created for the mission, Gai destroyed the supply depots over a series of days without running into trouble except for the last one. When he sought to destroy the last supply depot, Gai encountered the "Magic Bullet of Dusk" Miguel Aiman in his custom GINN. Aware that his GINN was unsuitable for MS combat, Gai initially sought to shake Miguel off, but Miguel proved too skilled and his GINN was too nimble, forcing Gai to fight.

The two ace pilots battled and proved to be almost equal, with Miguel using his assault rifle to shoot down two rounds from Gai's Cattus rifle, the first round aimed at his GINN and the second round fired at the supply depot after a pair of flashbangs went off. At this point, Gai ran out of ammunition, leaving him with little choice as to his course of action. The two GINNs engaged once more in close combat with Gai's GINN getting stabbed in the torso by Miguel's GINN's heavy blade and the latter losing its right arm. Gai then abandoned his mobile suit and set it on a preset course towards the supply depot at maximum thrust. The mobile suit successfully crashed into and destroyed the depot, completing the mission. Gai hid amongst space debris until ZAFT retreated. 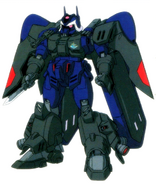