The ZGMF-1017 GINN Fuego is a customized GINN developed for heavy artillery attack. For this purpose, it has been modified extensively to the point that it no longer resembled a mobile suit. It lacks legs, instead possessing a tank like lower body propelled solely by rocket thrusters. The standard GINN arms are replaced with new longer, though thinner, arms that mount shields onto the forearms. For combat, its only weapons are 16 missile launchers, each capable of firing multiple missiles. The GINN Fuego is designed to serve alongside the ZGMF-1017 GINN Tempester, providing long-range fire support with its missiles while the GINN Tempester attacks from close-mid range.

The GINN Fuego is equipped with 16 multiple tube missile launchers.

In January of C.E. 71, Otark used the GINN Fuego in tandem with the ZGMF-1017 GINN Tempester to attack Junk Guild tech Lowe Guele in the debris belt in order to steal his MBF-P02 Gundam Astray Red Frame. The attacks were designed to keep the Red Frame flying around until it ran out of power and could be neatly scooped up without any resistance. To counter their own need for power, the pirates hid spare batteries on various bits of debris with signalers to tell them where it is. However the Junk Techs figured out their trick and after Lowe resupplied with a fresh battery from Liam they analyzed the enemies' movements and figured out the location of the last battery. As the GINN Fuego was going to resupply, it was intercepted by the Red Frame and destroyed. Without its partner backing it up, the GINN Tempester also quickly fell. 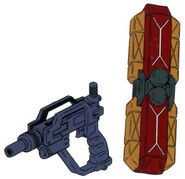 Handgun and Shield
Community content is available under CC-BY-SA unless otherwise noted.
Advertisement