A GINN variant that is only used for military or formal ceremonies, the GINN Ceremonial Decoration Type (CDT) is basically a standard GINN with ceremonial painting and gold decorations made of resin. Since coordinators do not share a common history or culture, the suit was designed by a computer simulation based on color psychology and other social sciences. The suit isn't designed for combat and this is reflected in its armament. If piloted by a commander, the suit carries an elegant ceremonial saber similar to the sabers on older personal gala uniforms. On the other hand, if piloted by an ordinary soldier, the GINN CDT is equipped with a ceremonial 76mm rifle.

A bolt action single-shot rifle, its stock is made with real oak, which is growth accelerated using biotechnology. Its sling belt is made of natural leather from cultured skin tissues. The rifle is normally loaded with blank ammunition, but it can also use live rounds as it shares some of its inner components with the standard GINN's machine gun.

A saber made of foam metal, it is used only by commanders and mounted on the left hip of the suit. The saber is mainly intended for cosmetic purposes, and is not meant for combat.

Used by a GINN Ceremonial Decoration Type in episode 22 of Gundam Build Divers, it is the same bazooka-like weapon as used by the standard GINN. It can fire various types of rounds depending on the magazine used.

The GINN Ceremonial Decoration Type is one of the many variants of the standard ZGMF-1017 GINN which ZAFT created to fulfil different purposes. This suit is one of the few models which isn't designed for combat but for formal ceremonies.

A number of GINN CDT were present during the signing of the Junius Treaty on March 10th, C.E. 72. One of the GINN CDT pilots at the signing ceremony, intending to avenge those who died in the war, attempted to destroy the bridge of the Earth Alliance battleship where the signing was taking place. Its pilot, a skilled sniper, planned to snipe the bridge using specialized armor-piercing rounds loaded into the GINN's ceremonial rifle. However, this plan was foiled by Gai Murakumo and his Blue Frame Second L.

The unit was still in active service in C.E. 73, with some of them being used to welcome PLANT Supreme Council chairman Gilbert Durandal on the colony Armory One.[1] 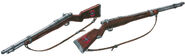 On standby at Armory One (Angry Eyes, HD Remastered)