ZAFT's first official mass-production mobile suit, the GINN was developed by the Heinlein Design Bureau, one of PLANT's state-run military design bureaus.[1][2][3] It boasted higher versatility and expandability than its predecessor, the YMF-01B Proto GINN, and was capable of using a wide variety of weapons.[1][2] While the GINN inherited much of its design from the Proto GINN, its mobility and maneuverability were greatly improved thanks to enhanced thrusters, including a pair of large backpack thrusters.[1] Although classified as a Zero Gravity Maneuver Fighter, the GINN could function both in space and on Earth.[1][2][4]

In addition to the head-mounted mono-eye, which served as the mobile suit's main camera, the GINN featured a crest-shaped multi-functional sensor array with a camera at its base (with a LLLTV function), allowing the pilot to gather battlefield information in real time.[1][2][5][6] This system would later be used by many ZAFT mobile suits developed between C.E. 70 and C.E. 71.[7] Another notable feature of the GINN was that it had several hardpoints for mounting or storing its weapons, located on the left, right and back of the waist, as well as on the side of its legs.[2][8]

Most of the GINN's weapons were designed to combat the OMNI Enforcer's mobile armors, including its main weapons, the 76mm heavy assault machine gun and the heavy blade. To adapt to various battlefield situations and combat requirements, such as anti-ship combat or fortress assault, a wide range of optional weapons were developed for the GINN.[9] Among them was the D-type (meaning "destruction") equipment,[9] the heaviest of GINN's weapons, designed for anti-fortification operations.[10]

The combat abilities of one GINN was said to be equivalent to that of three to five TS-MA2 Moebius mobile armors used by the OMNI Enforcer, and it could single-handedly destroy an enemy escort ship.[1][2][4] This led to the ZAFT gaining an upper hand in the early stages of the war.[2] Due to the GINN's excellent versatility and expandability, many variants were developed and deployed, such as the ZGMF-1017M GINN High Maneuver Type tuned for ace pilots, and the ZGMF-LRR704B GINN Long Range Reconnaissance Type for reconnaissance.[2] Additionally, there are GINN units customized to suit their pilots, such as the ZGMF-1017 Miguel's GINN.[2]

A double-edged physical blade developed by Martius Arsenals using the same molecular processing technology as the outer armor of the Laurasia-class.[6][9] Its blade had incredible toughness, and could easily cleave an OMNI Enforcer mobile armor in half. When not in use, it was stored on the left side skirt armor.[6]

A ballistic machine gun developed by Maius Military Industry, the 76mm heavy machine gun was the standard armament of the GINN, since it could take full advantage of its high mobility.[6] It was the first automatic firearm developed for a mobile suit,[5] and had two firing modes: semi-auto (for precision firing) and full-auto (for rapid firing).[9] It was most suited for mid-range combat.[9] Its standard ammunition was the high velocity armor piercing (HVAP) round.[5] It was stored on the rear skirt armor when not in use.[8]

A D-type (meaning "destruction") weapon for attacking enemy fortresses, it was a pair of hand-carried missile launchers.[9][11] Each launcher was loaded with two small missiles and had two large missiles mounted on the side.[9]

A D-type weapon, it was a pair of missile pods each containing three missiles.[9] When used in conjunction with the GINN's radar, it was capable of limited target tracking.[6] Though an attachment allowing it to be hand-carried was developed in parallel, it was mostly mounted on hardpoints on the legs, since doing so frees the GINN's hands to carry other weapons.[5]

A D-type weapon,[11] it was a cartridge-based beam cannon.[9] Each cartridge had enough power to fire three shots.[11] Compared to the later beam rifles, it was very large and unwieldy. It was used less often than the "Canus" and the "Cattus" due to its low efficiency.[9]

A large bazooka-type weapon most suited for anti-ship combat.[9] It was fed by a replaceable box magazine mounted on the top, allowing it to reload or switch to other types of ammunition quickly.[5] It could also be used for attacking enemy fortress, and while originally developed for the GINN, it was also often used by other mobile suits.[11]

The GINN was able to use the sniper rifle normally equipped by the ZGMF-LRR704B GINN Long Range Reconnaissance Type. During Operation Spit-Break, one GINN so equipped attacked the LCAM-01XA Archangel during the ship's attempted escape from JOSH-A.

The GINN's cockpit has a lever for triggering the mobile suit's self-destruct system. A countdown begins when this lever is pulled, giving the pilot one minute to escape before the GINN explodes.[12]

Developed from the YMF-01B Proto GINN, the ZGMF-1017 GINN was the first mass production military use mobile suit developed by ZAFT and roll off the production lines in CE 69. It continued to be ZAFT's primary and most heavily mass-produced mobile suit up into CE 71. Many specialized variants of the suit were produced during the First Alliance-PLANT War to perform various tasks and for operating in diverse environment. The GINN was eventually replaced by the ZGMF-600 GuAIZ as ZAFT's main mass production type mobile suit, but it and its variant still remain in common use late into CE 73.

Appearing in the manga Mobile Suit Gundam SEED Re:, it is a custom colored GINN used by Rau Le Creuset after his outstanding performance at the Battle of Yggdrasil. The GINN's color scheme is similar to that of the standard ZGMF-515 CGUE color scheme. 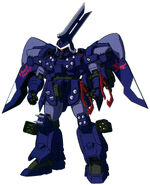 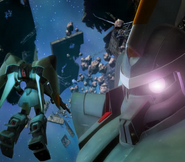 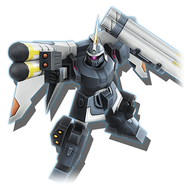 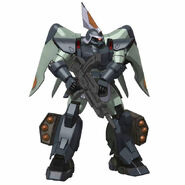 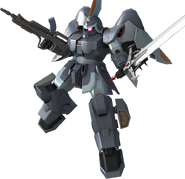 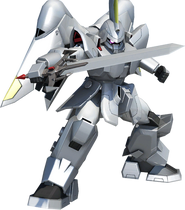 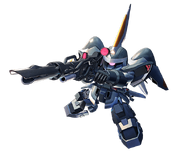 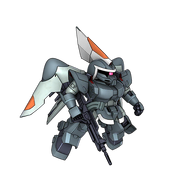 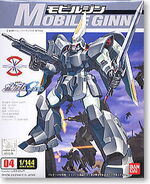