A customized, blue-colored ZGMF-1017 GINN used by Elijah Kiel, a member of the Serpent Tail mercenary group. Its basic performance is no different from that of a normal GINN, but its head's crest-shaped sensor array has been replaced with a buster sword, which served as a last resort weapon. After being damaged in battle with Gud Vair's customized GINN, it was repaired using parts salvaged from Vair's GINN, resulting in its outward appearance changing to a mix of red and blue. The repaired suit is renamed as Elijah's GINN Custom. Due to Elijah's friendship with Gud, the repaired GINN holds great sentimental value and he continues to pilot it even as it became outdated.

A sharp blade mounted on the head. When used, the head rotates 180 degrees to protect the sensors, but it can be used without rotation. It mainly served as a last resort weapon, because the sensors may malfunction due to the impact when it is used.

The same double-edged physical blade as used by the standard GINN. Its blade has incredible toughness, and can easily cleave an Earth Alliance mobile armor in half. When not in use, it is stored on the left side skirt armor.

A ballistic machine gun that served as the standard equipment of the GINN, since it can take full advantage of the mobile suit's high mobility. It has two firing modes: semi-auto (for precision firing) and full-auto (for rapid firing). It is most suited for mid-range combat. Its standard ammunition is high velocity armor piercing (HVAP) rounds. It is stored on the rear skirt armor when not in use.

The same D-Type (meaning "destruction") weapon as used by the standard GINN, it is a pair of missile pods each containing three missiles. When used in conjunction with the GINN's radar, it is capable of limited target tracking. Though an attachment allowing it to be hand-carried was developed in parallel, it was mostly mounted on hardpoints on the legs, since doing so frees the GINN's hands to carry other weapons.

A large bazooka-type weapon most suited for anti-ship combat, it could also be used for attacking enemy fortress. It was fed by a replaceable box magazine mounted on the top, allowing it to reload or switch to other types of ammunition quickly.

Throughout the First Alliance-PLANT War, Elijah Kiel used his custom GINN to support Gai Murakumo on missions. It was involved in many missions such as the attempted destruction of the Gundam Astrays in the ruins of Heliopolis and the defense of Artemis. Sometime prior to the beginning of the Second Alliance-PLANT War, Elijah's GINN was badly damaged by Kaite Madigan, when he interrupted a battle between Kaite and Gai. Elijah then moved on to the ZGMF-1001 Elijah's ZAKU Phantom. 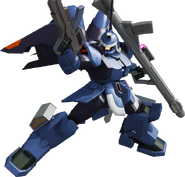 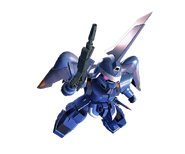