A variant of the ZGMF-1017 GINN, the GINN High Maneuver Type was created to extend the lifespan of the GINN series and to fill the gap before deployment of the ZGMF-600 GuAIZ. It was also tuned for ace pilots. Due to the new backpack and the addition of vernier thrusters all over the body, the mobile suit has improved maneuverability, acceleration and traveling range in space. Its turning speed is also improved by 180% and to handle the increased stress, its joints are strengthened by 30%. The suit's developers placed a high priority on reliability and productivity, and as such only battle-proven technologies are used. A good example of this is that the new backpack utilize the MMI-M729 Thruster Engine that was widely used by battleships.

Ace pilots that received the GINN High Maneuver Type were very satisfied with its performance. Although only a limited number of the machine were produced by the time GuAIZ was deployed, the fact that it has the same operability as the GINN and shares many parts with it, making maintenance and repair work simple, caused it to be strongly supported by many soldiers and calls for it to be assigned to the front lines remain high. Weapons wise, the GINN High Maneuver Type is typically equipped with a JDP2-MMX22 experimental 27mm armor assault rifle, which mounts a MA-M3 heavy blade for close combat.

An experimental rifle that utilizes new gunpowder and a smaller caliber bullet so as to increase ammunition capacity without any loss in power. An improved MA-M3 heavy blade is mounted at the bottom for use as a bayonet. The heavy blade can be detached and held in hand if needed.

A handheld weapon that emits a blade-shaped beam for close combat. In the Second Battle of Jachin Due, Mikhail Coast's unit was among those equipped with this weapon.

Fitted in the new high mobility backpack, it is a type of engine that is commonly used in battleships. Thanks to this engine, the GINN High Maneuver Type has improved acceleration and an enhanced traveling range in space. It also serves as the prototype for the laser pulse thrusters employed in the METEOR units.

The GINN High Maneuver Type was one of the many variants of the ZGMF-1017 GINN deployed by ZAFT during the First Alliance-PLANT War. One such unit was piloted by Rau Le Creuset during the Battle of Endymion Crater on June 2, C.E. 70, where he first fought against Mu La Flaga and his TS-MA2mod.00 Moebius Zero.[1] Another ZAFT ace pilot, Mikhail Coast, was known to have piloted two GINN High Maneuver Types, his first unit was captured by the mercenary group Serpent Tail after being lured into a trap. Afterwards, Mikhail received a second unit as a replacement. With this unit, he battled Morgan Chevalier's GAT-01A1+AQM/E-X04 Gunbarrel Dagger during the Battle of Boaz[1], and later participated in the last battle of the war, the Second Battle of Jachin Due. During the war, a variant known as the ZGMF-1017M2 GINN High Maneuver Type II was also developed, and it had improved close combat capabilities compared to the original GINN High Maneuver Type. 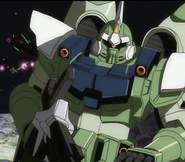