The GINN Assault Type is a Mobile Suit in the Cosmic Era timeline.

The GINN Assault Type is basically a standard ZGMF-1017 GINN equipped with "Assault Shroud" Armor (hence the "AS" acronym in the model code), a set of armor that contains built-in weapons and additional thrusters to improve offensive, defensive, propulsion capabilities as well as mobility. Additional batteries are installed in the backpack armor to meet the additional energy needs and to improve operation time. On the whole, the armor is designed mainly to protect the front of the MS from attacks. The Assault Shroud is one of ZAFT's plans to improve GINN's versatility but with the development of higher performance MS, such as ZGMF-515 CGUE, ZAFT drops this plan. As such, only a limited set of armor is produced and hence GINN Assault Type is a rare GINN variant. GAT-X102 Duel Gundam's Assault Shroud is inspired by GINN Assault Type's Assault Shroud.

A pair of Gatling guns are mounted on the suit's shoulders, they can function as both a long range weapon or as CIWS for intercepting missiles. These shell firing weapons have a high-rate of fire and can damage lightly armored units.

M68 "Pardus" short-range guided missile launcher is a "D-Type" assault weapon more often used in attacking base or fortress. They're mounted on the GINN's legs.

Mounted on the GINNs wrists, although the grenades are not very effective against large ships, they are ideal mid-range anti-mobile suit weapons.

A pair of grenades are hidden within the additional chest armor, one on each side of the chest. To fire the grenades, the additional armor has to flip open.

A composite weapon used by mobile suits piloted by professional MS pilot, Kaite Madigan. It is a customized handgun that can switch between firing beam or solid rounds, and is equipped with a "Armor Schneider" knife blade for close combat.

The MA-M3 heavy blade is a sword and the standard close range armament of the GINN series of mobile suits. It is manufactured using molecular processing technology and has an appearance similar to an European broadsword, featuring a double-edged blade. The design of the blade relies on both its weight and the force of the attack to crush armor as much as it relies on its keenness to cut. When not in use, the blade is typically mounted on the left side of the waist.

Used by the GINN Assault Type in the manga Gundam SEED Re:, it is developed from the regular GINN's heavy assault rifle with added firepower and capacity. It has multiple modes of fire, one rapid-fire and the other a single-fire mode that has more power. The assault rifle is clip-fed and extra clips can be carried as spares.

One custom version belong to the professional MS pilot Kaite Madigan appears in the Seed Destiny astray manga and photonovel. While in the Mobile Suit Gundam SEED Re: manga, there are two units on board the Nazca-class ship, Vesallius, piloted by Miguel Aiman and Olor Kudenbru. In this manga, the GINN Assault Type was used in the Heliopolis mission to capture the G-Weapons. Both units were destroyed during their battle with the GAT-X105+AQM/E-X02 Sword Strike Gundam. After that, no other appearances of this GINN variant were seen. 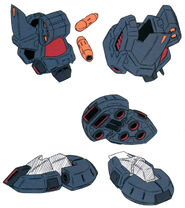 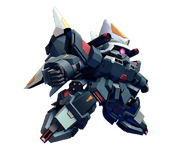 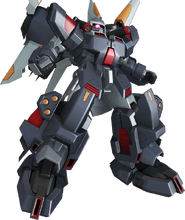 Retrieved from "https://gundam.fandom.com/wiki/ZGMF-1017AS_GINN_Assault_Type?oldid=464787"
Community content is available under CC-BY-SA unless otherwise noted.