The ZAKU Phantom is a commander/ace pilot use version of the ZGMF-1000 ZAKU Warrior and features higher performance. Appearance wise, the ZAKU Phantom is almost identical to the ZAKU Warrior except for an additional shield on the right shoulder and a blade antenna on its head for C4ISR purpose (Command, Control, Communications, Computers, Intelligence, Surveillance and Reconnaissance). The armament of the suit is similar to the ZAKU Warrior, and it also has the ability to utilize the Wizard System to adapt to different combat roles.

Both shoulders of the ZAKU Phantom are equipped with shields, leaving its hands free to hold weapons. Each shield is capable of independent movement, has an anti-beam coating on its surface and three spikes for use in melee combat. The shield's back has hardpoints for mounting two spare magazines for the beam assault rifle. It also stores the beam tomahawk, which slides out of a slot near the top of the shield when deployed, grip first.

An axe-shaped weapon that emits a curved beam blade, it is the ZAKU Phantom's primary close combat weapon and can also be thrown. The ZAKU Phantom has two beam tomahawks, one stored in each shield.

A handheld, bazooka-type weapon first used by the ZGMF-1017 GINN. It is most suited for anti-ship combat, and is fed by a box magazine mounted on the top, allowing it to reload or switch to other types of ammunition quickly. Since beam weaponry is ineffective underwater, this weapon is used by ZAKU Phantom as the main weapon in aquatic combat.

A series of optional, interchangeable armament packs developed by ZAFT that closely resemble the Striker Pack System used by the Earth Alliance. Various types of armament packs have been created so as to give the ZAKU Phantom different characteristics to suit the situation at hand. These packs are usually mounted on the ZAKU Phantom's back, but there are several packs with other attachment locations and methods, including those that require the replacement of certain parts of the mobile suit.

After the end of the first war and the signing of the Junius Treaty, a new generation of mobile suits was needed by ZAFT to cope with the technological and numerical restrictions placed on the superpowers as part of the treaty. The ZAKU series's ZAKU Phantom was one such machine. An enhanced version of the standard ZAKU Warrior produced as part of the "New Millennium Series" of mobile suits, it is used by commanders and ace pilots. As a result, most ZAKU Phantoms feature a custom color paint job, although some Phantoms are painted in the same green color scheme as the basic ZAKU Warrior.

Prominent ZAFT aces using the ZAKU Phantom are first war veterans Yzak Jule,[1] Dearka Elsman[2] and Heine Westenfluss,[3] while other pilots include Rey Za Burrel[4] and Riika Sheder, with nearly each of them piloting a custom colored version. Since the ZAKU Phantom was designed to utilize the Wizard System, each pilot fields his unit with one such armament pack, with the EX-M Blaze Wizard being the most prominent. However as the war progress, some of them switched to more advanced suits that become available later, such as the ZGMF-2000 GOUF Ignited. 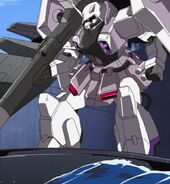 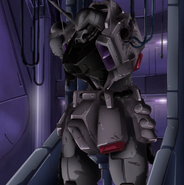