A modified ZAKU Phantom given to Serpent Tail member Elijah Kiel by Kaite Madigan after the latter accidentally destroyed the former's customized ZGMF-1017 GINN. The most unique characteristic of the ZGMF-1001 Elijah's ZAKU Phantom is that it has Phase Shift armor, causing its color to turn from grey to red when the armor is activated. The Elijah's ZAKU Phantom's PS armor is special in that it is activated only when Elijah thinks it is necessary. Furthermore, it is only applied to certain areas of the MS, which are determined after analyzing Elijah's fighting style and cover his weakness. Both features are designed to help conserve the MS's energy.[1]

The Elijah's ZAKU Phantom is armed with Elijah's trademark head "buster sword" and can mount 3-tube "Pardus" missile launchers on its legs, while the shoulders can be fitted with beam cannons or other suitable equipment, instead of the standard shoulder shield and spike. However, doing this would also remove the beam tomahawk stored within the shield. Elijah's ZAKU Phantom retains the ability to mount the Blaze, Gunner, and Slash Wizard Packs, but it is most often equipped with its own customized flight-capable Wizard Pack.

Elijah's ZAKU Phantom mounts a shield on its left shoulder, and this is the same type of shield used by the regular ZAKU Phantom. It has an anti-beam coating and three spikes for use in melee combat. The shield's back has hardpoints for mounting two spare magazines for the beam assault rifle. It also stores the beam tomahawk, which slides out of a slot near the top of the shield when deployed, grip first. The shield can be swapped for other equipment.

An axe-shaped weapon that emits a curved beam blade, it is the same as the one used by the regular ZAKU Phantom and can also be used as a throwing weapon.

The same model of weapon used by the GINNs, a pair of them can be optionally mounted on the legs.

A pair of beam cannons can be mounted on the shoulders instead of the shoulder spike and shield, they are weaker than standard beam cannons but have a wide range of fire during close combat.

Mounted on the Gunner Wizard, the M1500 "Orthros" high-energy long-range beam cannon is a powerful beam weapon with a long effective range. However, the weapon is slow firing and has quite a recoil when fired, thus its operation requires the ZAKU Phantom to use both hands. When in use, the cannon is slung under the right shoulder and unfolds into its full length, which is taller than the mobile suit. When not in use, the cannon is folded and stored on the Gunner Wizard pack. Because of the intense power requirements of the "Orthros", the Gunner Wizard pack comes with its own battery to draw energy from.

A Wizard pack designed by Kaite for Elijah's ZAKU Phantom. The main thrusters provide the MS with higher mobility and can tilt downwards for more than 90° or upwards close to 90°. The wizard pack also mounts additional thrusters and wings on the sides. When they are deployed, the suit gains greater thrusts as well as flight capability in the atmosphere.

Elijah's ZAKU Phantom can dock with the powerful METEOR unit developed for Justice and Freedom Gundam. However, the METEOR has to be fitted with N-Jammer Canceller and nuclear reactor before it can be used by Elijah's Zaku Phantom.

Because Kaite Madigan had unintentionally disabled Elijah Kiel's GINN, Kaite compensated by giving Elijah one of his own ZAKU Phantom and customizing it to fit Elijah's usage. In its first battle, Elijah used the head "Buster sword" to penetrate the 360° "Armure Lumiere" barrier of the repaired Hyperion Unit 3, defeating the "Hero of Eurasia", Ivan Zamboise.[2] It was later hijacked by the Carbon Human clone of Gud Vair after his match with Elijah.[3] The suit's whereabouts is currently unknown and Elijah has switched to piloting the Vent Saviour Gundam that Gud Vair left behind for him. 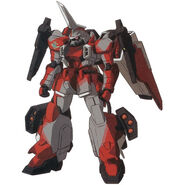 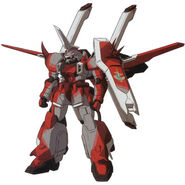