Mounted on the back-mounted Gunner Wizard, the M1500 "Orthros" high-energy long-range beam cannon is a powerful beam weapon with a long effective range. However, the weapon is slow firing and has quite a recoil when fired, thus its operation requires the Gunner ZAKU Phantom to use both hands. When in use, the cannon is slung under the right shoulder and unfolds into its full length, which is taller than the mobile suit. When not in use, the cannon is folded and stored on the Gunner Wizard. Because of the intense power requirements of the "Orthros", the Gunner Wizard comes with its own large capacity energy tank to draw energy from.

Both shoulders of the Gunner ZAKU Phantom are equipped with shields, leaving its hands free to hold weapons. Each shield is capable of independent movement, has an anti-beam coating on its surface and three spikes for use in melee combat. Additionally, the shield's back has hardpoints for mounting two spare magazines for the beam assault rifle. It also stores the beam tomahawk, which slides out of a slot near the top of the shield when deployed, grip first.

An axe-shaped weapon that emits a curved beam blade, it is the Gunner ZAKU Phantom's primary close combat weapon and can also be throw.

A handheld ranged weapon of the ZAKU Series, this beam firearm's design emphasizes destructive power and rapid-fire capabilities. Its accuracy is lowered somewhat as a result, but the scattering of its beam shots allows for simultaneous attack of multiple targets. Unlike most beam rifles, it does not draw power from the mobile suit's battery. Instead, the rifle is powered by the energy stored in a replaceable drum-type magazine. When not in use, this weapon could be stored on the back waist armor. 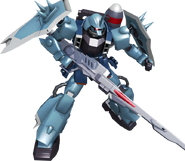 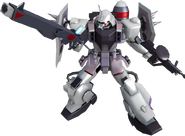 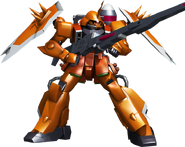 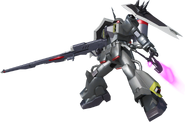