The ZAKU Warrior was one of the machines in the "New Millennium Series" that was developed to cope with the technological and numerical restrictions placed on the various superpowers as part of the Junius Treaty signed after the first war. When the Second Alliance-PLANT War broke out between ZAFT and the EA, the ZAKU Warrior and its higher performance sibling, the ZGMF-1001 ZAKU Phantom, were used alongside the older models in the war. Due to the ability to utilize the "Wizard System", which is a series of interchangeable armament packs, the ZAKU Warrior can adapt to different combat situations. One such pack is the Slash Wizard equipped by the Slash ZAKU Warrior. While not the most common configuration of the ZAKU Warrior, the Slash ZAKU Warrior participated in many theaters of war such as the PLANTS, the moon, and the Orb Union. 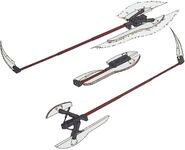 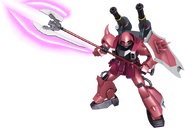 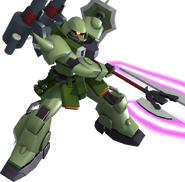 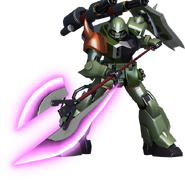