The Noctiluca ZAKU Warrior is a Mobile Suit Variation from the series Gundam SEED Destiny.

The armament of the Noctiluca ZAKU Warrior consists of the four hip mounted grenades and the MMI-M633 beam assault rifle, which are all standard weaponry of the ZAKU series. Besides these weapons, the added skid plates mount four Mark 13 homing torpedoes as well as eight M25 anti-submarine depth charges for underwater combat.

When ZAFT rolled out the "New Millennium" series of mobile suits, it gave the ZAKU mobile suits produced as part of it the ability to mount several Wizard Packs to adapt to different combat situations and environments. One such ZAKU configuration is the Noctiluca ZAKU Warrior, an aquatic variant which is produced in limited numbers. Besides mounting the Noctiluca Wizard pack, the base suit itself comes with several structural alterations, such as shoulder and head-mounted fins, as well as mounting skid plates to the feet and additional weaponry. Since none of these units has been seen in action so far, it is unknown how the Noctiluca ZAKU Warrior performs. 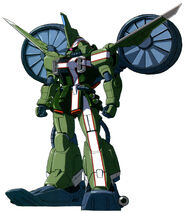 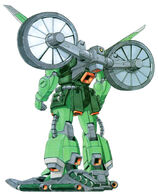 Retrieved from "https://gundam.fandom.com/wiki/ZGMF-1000/AAL_Noctiluca_ZAKU_Warrior?oldid=241557"
Community content is available under CC-BY-SA unless otherwise noted.