A variant of the ZGMF-1000 ZAKU Warrior, the Command ZAKU CCI (Command, Control and Information) is meant for battlefield communication and command purposes. It is equipped with the EX-R4 Command Wizard, one of the interchangeable armament packs in the Wizard System. The EX-R4 Command Wizard consisted of a large backpack installed with numerous sensors and communications antennae, a large dish antenna that replaced the ZAKU Warrior's shoulder-mounted shield, and a handheld antenna rifle. With these equipment, the Command Wizard allows the Command ZAKU CCI to communicate easily with other units even under N-Jammer interference.

Additionally, the internal components of the ZAKU (including the drive system and avionics) have also been heavily modified to suit its new role. As a result, although it looks like a normal ZAKU, it is considered by some as a totally different unit. This also means that the Command Wizard cannot be used effectively by a normal ZAKU Warrior or ZAKU Phantom. Although designed for a non-combat role, as seen by the dropping of the "F" (standing for "Fighter") from its model number, the Command ZAKU CCI can nevertheless carries the same four grenades as the other suits of the ZAKU series. The Command ZAKU CCI is often accompanied by an escort of two regular mobile suits when it is deployed.

Four Hand grenades are stored on the waist, and they can be of several different types, including fragmentation, high-explosive, and smoke grenades.

A handheld equipment and the most costly of all the Command ZAKU CCI's equipment, its constructing cost is almost equal to one whole ZAKU Warrior. The rifle uses the frame of the standard beam assault rifle but replaces the barrel and battery clip with additional antennae. It is equipped with technology derived from the magnetic field control system of the mirage colloid stealth system, and as a result it has better performance than other antenna rifle.

When ZAFT introduced its "New Millennium" series of ZAKU mobile suits, it created these suits with the ability to utilize the Wizard System to adapt to various combat and non-combat situations. An example of the latter is the EX-R4 Command Wizard, which is used by the limited production Command ZAKU CCI. At least one Command ZAKU CCI was known to be used in CE 73 during battle in the Republic of East Asia. This suit, while scouting the forest, was destroyed, along with two other ZAKUs accompanying it, by Lukas O'Donnell and Xist Elwes. 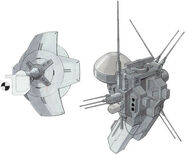