Yuu Kajima (ユウ・カジマ, Yuu Kajima?) is a fictional character from Mobile Suit Gundam Side Story: The Blue Destiny. He is the leader of the Guinea Pig Team, one of the Earth Federation's experimental corps.

Yuu Kajima was an Earth Federation pilot from the very beginning, participating in the Battle of Loum. In late U.C. 0078, he found a mostly intact Zaku in a colony; this discovery would be a great benefit to the Federation's V Project. Yuu is the leader of the Guinea Pig Team, one of the Federation's experimental corps who test new technologies before they're mass-produced and distributed to the Federation Forces as a whole. During a sortie, the team encounters the RX-79BD-1 Blue Destiny Unit 1 attacking enemy and ally alike. When the GM comes after them, Philip and Summona are quickly defeated, and Yuu only barely drives it off. Later, the team is attacked by a Zeon mobile suit that fights similarly to the blue GM. Just as things look their worst, the blue GM appears and drives the enemy off.

Back at the base, Yuu is assigned to pilot the Blue Destiny Unit 1. He becomes highly proficient with it, despite the fact that its EXAM System has a severe impact on his mind. Later, Yuu and his team participate in the Federation's drive to recapture California Base. Using the Blue Destiny, Yuu is able to stop the Zeons from launching a nuclear missile. However, he is soon attacked by the MS-08TX［EXAM］Efreet Custom, piloted by Zeon ace Nimbus Schterzen. As they fight, the voice of the EXAM System reveals itself as a young Newtype girl named Marion Welch. She explains to Yuu that she was originally an assistant to EXAM creator Chlust Moses, but an experiment gone wrong put her in a coma and made an imprint of her soul on the machine. As a result, the EXAM System gives any pilot who uses it surrogate Newtype powers, but most have been driven insane by Marion's attempts to contact them. Marion begs Yuu to destroy EXAM and free her spirit. During their duel, Yuu and Nimbus cut each other down simultaneously and destroying their EXAM Systems.

However, Yuu's work is not yet done. Soon after, he meets Professor Chlust Moses himself and learns that the old man is an insane xenophobe, paranoid with the fear that Newtypes will take over. Moses justifies EXAM as a necessary step in ensuring that non-Newtypes remain dominant. As they look over the newly completed RX-79BD-2 Blue Destiny Unit 2 and RX-79BD-3 Blue Destiny Unit 3, Zeon special forces attack, allowing Nimbus to hijack Blue Destiny Unit 2 and kill Moses, ensuring that he won't be able to make EXAM anymore. Nimbus escapes to space, with Yuu and his friends in hot pursuit using Blue Destiny 3. The group chases Nimbus to Side 5, where EXAM was first made, and a final showdown begins. Nimbus declares that he's the only one worthy of using EXAM and attempts to kill Yuu. Once more, the two strike each other down in unison, but this time Nimbus is killed, while Yuu drifts in space, where he is later picked up by his team.

After the events of the games, Yuu continued on as a Federation soldier for the rest of the One Year War. He remained with the Federation during the Gryps Conflict and first Neo Zeon movement, eventually ending up as a member of Londo Bell during the second Neo Zeon movement. His actions while piloting Blue Destiny 1 earned Yuu the nickname "Blue Death". It is revealed that Yuu was one of the RGM-89 Jegan pilots who assisted in pushing Axis back at the end of Mobile Suit Gundam: Char's Counterattack. 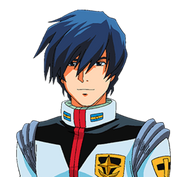 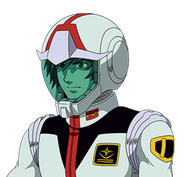 Retrieved from "https://gundam.fandom.com/wiki/Yuu_Kajima?oldid=437116"
Community content is available under CC-BY-SA unless otherwise noted.