From what has been seen of her, Yurin appears to be a quiet girl, who rarely ever speaks, unless needed. She also has a strong character despite her life being in danger during the UE's attack on her home colony of Nora, and being on the battlefield against said enemy, she remained relatively calm.

Despite appearing like a normal girl, Yurin is an X-Rounder. Like other X-Rounders, her abilities include a sort of spatial awareness, precognition, and the ability to predict the movements of the UE.

Yurin was living a peaceful life until the UE attack on her home colony Nora in 115 A.G. During the ensuing chaos of the evacuation, Yurin was discovered by Flit Asuno and his AGE-1 Gundam AGE-1 Normal. Never having seen the machine, Yurin fled in fear but stopped after Flit revealed he was not an enemy. He had her enter the Gundam with him so they could reach the Federation's new battleship, Diva, to escape. However the floor beneath them collapsed and thus were lost in the lower levels of the colony. To Flit's surprise, Yurin was able to guide him out of the colony and even predicted how (foretelling of an attack by a Gafran). Once out in space, the pair were engaged in battle by the Gafran, which Flit was able to defeat thanks to the Gundam's new DODS rifle, however Yurin warned him that a new UE model and a Gafran were heading towards them. In the ensuing battle, Flit could not land a hit on the attacking Gafran and was beginning to become frustrated, but Yurin calmed him down by placing her hand on his and allowing him to predict the enemys' movements, thus defeating it. Yurin does this again against the new UE model, allowing Flit to stall it long enough for the Diva to escape with the civilians in the colony's core. Afterwards aboard the Diva, the civilians are picked up by a Federation ship, so Flit and Yurin bid each other farewell, with Yurin giving Flit her ribbon as a token of thanks and as she leaves asks him if they will meet again.

When the Diva traveled to the colony of Minsry in order to meet with the Zalam-Euba Alliance, Yurin reunited with Flit while the crew was on shore leave. While the Diva was being upgraded by the AGE System, Flit and Yurin spent time together around the picturesque scenery of Minsry. After Flit and the Diva crew departed the colony, Desil Galette approached Yurin about needing her X-Rounder powers, and threatened her into serving the UE with the consequence of never seeing Flit again. Yurin reluctantly complied and was taken by the UE to the Space Fortress Ambat, where she was assigned to "pilot" a new machine: the xvb-xd Farsia, specifically designed for X-Rounders.

While the Grodek Faction began their assault on the Space Fortress Ambat, the battle was falling into their hands. With that, Desil launched his xvv-xc Zedas, while others forced Yurin into the xvb-xd Farsia. Arriving on the battlefield, Yurin immediately spotted Flit's AGE-1S Gundam AGE-1 Spallow dueling Desil, and she came between the two. She declared her excitement to see Flit, who was shocked at her appearance on the battlefield. However, Desil suddenly took control of all the Farsia's controls, rendering Yurin a helpless hostage. When the Farsia and Zedas had damaged the AGE-1 Spallow, Desil went for the finishing blow with the Zedas sword, but Yurin managed to get control of the Farsia and put the Farsia in the path of the Zedas, taking the blow for Flit. Since the suit was heavily damaged, Yurin told Flit that living was difficult, and that she wanted to be with him forever. The Farsia then exploded, taking Yurin's life. Her death would cause Flit Asuno's personality to take a dark turn, refusing to recognize the Vagans as human beings, and even vowing to exterminate them once and for all.

Yurin made her long awaited reappearance in the final episode of the series. Appearing in Flit's vision along with other deceased characters from the previous generations. Reunited with his long lost love, Flit admits that he knew the Vagan were suffering too but still hated them because they took Yurin away from him and he couldn't protect her. Yurin gave him a warm smile and thanked him but told him that it's alright now and started fading away. As she did, Yurin said to him that he should forgive everyone and then forgive himself. This intimate moment in Flit's vision makes him realize his mistakes and turn in his efforts into uniting both Vagan and Earthlings and become the savior he was destined to be.

First appearance (The Power of AGE)

Meeting Flit Asuno for the first time (The Power of AGE)

Inside the cockpit with Flit (The Power of AGE)

Giving her ribbon to Flit before leaving. (The Twisted Colony)

In her pilot suit while detained by the Vagan. (Space Fortress Ambat)

Yurin with her hair down in her dream. (Flash of Sorrow)

Burning away in her dream. (Flash of Sorrow)

Final moments before dying from the exploding Farsia. (Flash of Sorrow)

Yurin returns in Flit's vision. (End of a Long Journey) 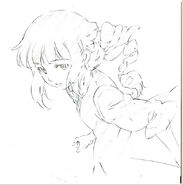