A young Newtype mobile suit pilot enlisted in the AEUG, she is the main pilot of the Red Zeta. While based on Earth, she is given orders to sortie in the prototype Red Zeta along with two other units to destroy the mysterious QRX-006 Geminus wreaking havoc in space. Before launching, she catches a glimpse of her squadron leader, who is revealed to be the legendary Amuro Ray, and remembers meeting him once during the One Year War at the funeral of her mother when Yurii was still a child.

After a fierce battle in space, the Geminus is ultimately destroyed when the Red Zeta, piloted by Yurii, used its unique Psycho Neutralizer system to take control of the Geminus' remote hand to crush the Geminus' head (where the control room was located), sending the Red Zeta and the giant mobile armor's burning wreckage plummeting into Earth's atmosphere. Afterwards, Yurii Ajissah is seen in a forest on Earth resting on the palm of a giant Buddha statue. 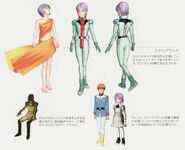 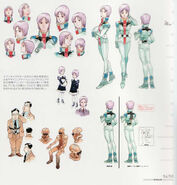