The Gundam Wiki
Register
Don't have an account?
Sign In
Advertisement
in: Characters, Cosmic Era characters, Male,
and 2 more

Yuna Roma Seiran (ユウナ・ロマ・セイラン) is a fictional character that appears in Mobile Suit Gundam SEED Destiny. Yuna is the son of Unato Ema Seiran, the prime minister of Orb that succeeded former Chief Representative Uzumi Nara Athha. Yuna is also Cagalli Yula Athha's fiance by arranged marriage, a union that was approved of by both their parents, a revelation that is revealed by Myrna, Cagalli's caretaker. Yuna is mostly used as comic relief, presented as a villain who sees himself as more calculating and dashing than he actually is.

Because of Orb's treaty with the Earth Alliance, the Minerva is forced to depart from Orb. Yuna deploys the Orb forces out to prevent them from reentering their waters just as the Minerva leaves. There is a massive Earth Alliance fleet waiting for the Minerva just outside. However, Shinn Asuka activates his SEED mode for the first time and lays waste to the Earth Alliance forces with his ZGMF-X56S Impulse Gundam, forcing them to retreat. Yuna was shocked that the entire fleet was defeated by a single mobile suit.

Soon after, Yuna is about to be married to Cagalli Yula Athha, but right before they can be officially married, Kira Yamato showed up in his ZGMF-X10A Freedom Gundam, disabling the Astray mobile suits. Yuna hides behind his wife-to-be, before running off, allowing Kira to successfully retrieve his sister, who nonetheless protested.

Yuna was outraged, and ordered the immediate destruction of the Archangel and Freedom Gundam. However, Captain Todaka, in command of the fleet ready to recover Cagalli decided to let the Archangel to escape safely out of his deep respect for its warriors on board, whom fought by his side in the previous war. 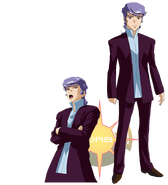 Yuna arrested by Orb Forces after giving order by Cagalli
Community content is available under CC-BY-SA unless otherwise noted.
Advertisement