Yukio Hidaka (ヒダヵ・ュキォ, Hidaka Keuko?, commonly called Yukki) is a character that appears in the Gundam Build Divers television series. He is the builder and pilot of the GM III Beam Master and the Jegan Blast Master.

Riku's classmate and best friend, who attends the same middle school in a coastal city. He loves the animated Gundam series and his knowledge puts any adult to shame. Though he is usually a quiet and reserved boy, he is confident in his skill as a Gunpla builder, and Riku considers him to be a reliable ally as a Diver in GBN.[1]

For his first trip into the Gunpla Battle Nexus Online with Riku Mikami, Yukio decided to customize his award-winning RGM-86R GM III Gunpla into the GM III Beam Master. Together with Riku and his GN-0000DVR Gundam 00 Diver, Yukio and his GM III Beam Master participated in a tutorial battle as suggested by Magee to familiarize themselves with the controls. During the battle, the pair were pitted against three OZ-06MS［MPD］ Leo NPDs. Despite some difficulties with the AI-controlled opponents, Yukio managed to destroy two of them, the first with the GM II Beam Master's buster binders, and the second using a combination of the missile pods and the beam rifle. After the battle, the two used their Gunpla to rescue Sarah. They were then tricked into a fight by Do-ji. The GM III Beam Master was overpowered and badly damaged by Do-Ji's customized Xvv-xc Zedas, but it contributed to Do-ji’s defeat when Yukio lends one of its beam saber to Riku and his 00 Diver. [2]

After his experience in the Mirror Mission, Yukio built the Jegan Blast Master so that he could improve his battle style further and be as strong as his friend, Riku Mikami.[3] The Gunpla made its debut during the Force Battle that pitted the Force Build Divers and its allies against the superior numbers of the Coalition of Volunteers.[4]

Yukki's classmate and best friend. He is a reliable diver for Riku.

Yukki and Riku found and befriended her in their first trip into GBN. Fellow Build Divers teammate.

Nanami Nanase's brother, Yukki, Riku and Momoka jointly recruited him into their force.

Yukki, Riku, Momoka, and Sarah met her while traveling to Perisia. She is later recruited into the Build Divers. 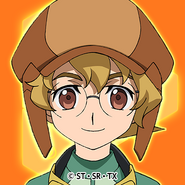