She was a member of Zeon's Foreign Legion unit under Ken Bederstadt during the One Year War. She was fatally wounded protecting May Kauwin during team's retreat from Federation forces. 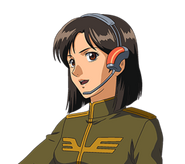