At first glance, Yuji comes off as a lazy vagrant. Often joking with his comrades and giving not much care to the importance of the situation. Often, he'll come off as cynical about things; often calling things "Dead" as his way of making light of grim circumstances. However, he's a very caring individual; often showing great admiration and loyalty for his comrades and peers. He'll fight fiercely when trying to protect people (whether friend or foe), and more than often has put his own life on the line in the defence of those closest to him.

However, as the One Year War progressed, and his fellow team members of Nemesis were labelled as traitors. Yuji's cynical demeanour began to subside; growing much calmer, collected and more serious than it had during the earlier days of his service. This behaviour grew even after this when he was recruited by the BGST.

Before his enlistment in the Earth Federation Forces, Yuji Arcana was revered as an excellent boxer in the realm of professional fighting; winning Canada's Pro-Boxing, rookie of the year award; best of three. Because of his fighting background and the methods he was trained in, this eventually translated into how he handled his mobile suits. Often favouring brutal close-quarter fighting and hand-to-hand combat over ranged warfare. Interestingly, when it came to such close range fighting, he was shown to be able to apply the myriad to boxing techniques into his piloting; being able to seamlessly duck, weave, hook and jab at and around his opponents to overcome them.

Before the outbreak of the One Year War, Yuji Arcana Spent his days as a professional boxer in Vancouver. Winning the "Rookie Of The Year Award, Best of three". However, after fragments of the colony drop struck Vancouver; Yuji enlisted as a member of the Earth Federation Ground Forces and was stationed at their reformed Vancouver base.

During a mission in November, Yuji had vanished from the battlefield. Presumed to be dead, Yuji returned to the base in a crippled RGM-79 GM. Because of this miraculous event, he was given the nickname "The Zombie GM". As he had managed to return alive, with his suit almost destroyed in the process.

After an act of bravery that saved a fellow squadmate's life. Yuji was recruited into the Nemesis Instructor Corps; acting as it's the newest member. After witnessing and thwarting several freak zeon attacks in and around the territory around California Base, Yuji and his fellow nemesis members had inadvertently involved themselves in a large conspiracy within the federation ground forces high command. This conspiracy was attempting to prolong the war between the federation and the remaining Zeon forces still trapped on earth. When they learned of this plot, the members of the conspiracy labelled the nemesis as spies and traitors. After learning the truth that one of their team members Tara I Cicero was a zeon spy; Yuji and his fellow nemesis members set out to prove their innocence and reveal the true culprits in this plot.

Soon after the one year war. Yuji was shot by a zeon sympathizer during a riot that was occurring near the site of Tara's trial. He was hospitalized briefly, then sent on his way. When tara was imprisoned, Yuji frequently visited him. Unfortunately, because of the federation's anti-terrorism actions, Yuji was shot again by a child during a home breaching he was forced to partake in. Once he was healed of his wounds, he would visit his friend Tara once more; only to learn he had been executed earlier that morning.

Because of post-war upheaval, Yuji became destitute as he was cut from the military due to a lack of funding. Over the next few years, Yuji spent most of his time partaking in the underground fighting ring as he gambled away his troubles. However, in U.C.0083, he was once again recruited by Major Saki Dessau into joining nemesis once again. This time, he and the team went in undercover to learn of the true intentions behind True Federal.

While within the ranks of True Federal and in charge of their mobile suit pilot training, Yuji underwent enhancement procedures that would activate some latent newtype abilities within him. He was given a brand new RGM-79FC Striker Custom and engaged the BGST in combat. However, after through much convincing by Ittou Tsurugi. He was freed from his brainwashing and soon joined the BGST and the other members of Nemesis in their mission to stop True Federal from enacting it's "Day of Benevolence" plan.

Yuji Arcana's Nickname "The Zombie GM" is based on a real-world slang term from the days of the second world war; the term "Zombie" being used by Canadian volunteers to describe unenthusiastic and inexperienced conscripts. 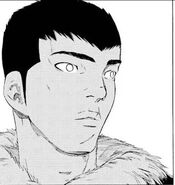 Retrieved from "https://gundam.fandom.com/wiki/Yuji_Arcana?oldid=458652"
Community content is available under CC-BY-SA unless otherwise noted.