Start a Wiki
This article is about the Mobile Armor. For the similarly named location, see Yggdrasil.

The Yggdrasill (ユグドラシル) is a mobile armor featured in the Gundam Reconguista in G anime series.

The Yggdrasill is a large pyramid-shaped MA. The cockpit is a three-seater with one main pilot and two sub-pilots. The Yggdrasill's armaments are the "tender beam" which is capable of both wide and long range attacks, and a "reflector barrier" for defense. Although it is a large machine, it can also behave finely and has high mobility. However a flow in the machine may cause the Yggdrasil to vibrate and the Tender Beam to take a spiral pattern.

The Yggdrasil was brought to Earth by the G-IT Corps in the Full Moon Ship and after being boarded by the Mask Corps they allied with the Capital Army and allowed Barara to pilot the Machine.

Yggdrasil attcked and single handedly managed to destroy many ships and mobile Suits of the combined Amerian and Dorette fleets whose weapons were powerless aagainst the Reflector Barrier. However it was attacked by the Megafauna and the Tender beams were ineffecting against the copy-paste shield of the G-Self Perfect Pack allowing the G-Self to close the distance and destroy it with Beam Sabers. 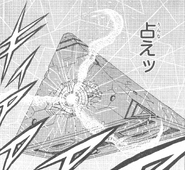 Retrieved from "https://gundam.fandom.com/wiki/Yggdrasill?oldid=463692"
Community content is available under CC-BY-SA unless otherwise noted.