Yazan Gable (ヤザン・ゲーブル, Yazan Gēburu?) is a character that appears in the Mobile Suit Zeta Gundam and Mobile Suit Gundam ZZ television series. He was one of the Titans famous aces during the Gryps Conflict. Unlike other aces in the conflict, Yazan showed no signs of Newtype potential, instead, he gained his fame through pure skill and power. In Zeta Gundam, he was responsible for killing more AEUG main characters than any other major Titan pilot. He was also one of the few Titan pilots to survive the Gryps Conflict, adding to his infamy.

Yazan is characterized by his love for battle and his confident, aggressive and bloodthirsty personality. While he has a pentient for brutality, he does seem to have an issue with how it’s carried out, having been disgusted by Jamaican’s plan to drop a colony on Von Brawn.

While not usually one to take orders, Yazan has shown himself willing to follow those whom he respects, having allied himself with Paptimus Scirocco halfway through the Gryps War. However, if he believes his superiors to be unfit to command or downright incompetent, he will disregard their orders, and in some cases, engineer their deaths.

Yazan is very capable as both a mobile suit pilot and battlefield commander, having planned and carried out effective attacks against the AEUG on multiple occasions. Although possessing no Newtype abilities, Yazan is more than capable of matching the battle prowess of Newtypes, such as Kamille Bidan and Char Aznable.

Born on Earth in U.C. 0060. Yazan's birth and the personal history of his family are shrouded in mystery. According to reports, he is of a British family line, and that his father is a former scholar, said to have made a grave error during research, thus making him retire from the university he was at. His mother was an uneducated wild woman, who loathed those with intellect and raised Yazan as a man who lives on instinct. A pastor persuaded his mother to put him in a seminary school far away, and for the first time, he received an education. He seemed to have a grudge against his father, with nothing nice to really say about him.

In Universal Century 0079, the Principality dropped a colony on Earth after declaring war against the Federation, damaging Yazan's home as a result. Information on Yazan after this point is unclear, but it is rumored that he became a mobile suit pilot for the Earth Federation and played an active role in it. However, because there is no record of Yazan on file, his superb piloting skills hadn't evolved until the time of the Gryps War. It also seems that he didn't leave any conspicuous achievements on record either.

Around Universal Century 0083, the Delaz Conflict yields no mention of Yazan's name either. He did not readily apply for the Titans during their inaugural role-calling. He spent his days earnestly training in a mobile suit and earned the nicknames of "savage" and "devil".

Yazan makes his major appearance in August of Universal Century 0087, Upon inclusion in the Titans, he was in the defense squad of Operation Apollo, which was to gain control of the city of Von Braun on the moon's surface. He became a battle leader of the Alexandria fleet and was given an experimental variable mobile armor and continued to attack the AEUG. At this time, Yazan acted as a superior to a recruit named Adol. The real reason behind his fighting was to mask his intense hatred towards his superior Jamaican Daninghan. However, he craftily arranges the demise of Jamaican by leading Emma Sheen and Kamille Bidan to the bridge of the Alexandria. When Emma fires a shot with her beam rifle, Yazan dodges the blast, allowing it to hit the bridge instead and kill Jamaican.[1]

Throughout the rest of the conflict, several different Titan leaders tried to recruit him to their wing of the group, most notably Paptimus Scirocco.[2] Yazan gained two wingmen, Ensigns Dunkel Cooper and Ramsus Hasa. Yazan proved to be more than a match for many of the AEUG's pilots. During the Battle of Gryps, Yazan single-handedly took out the AEUG battleship Radish, killing Henken Bekkener. Ironically, this brutal act helped seal the fate of fellow Titan Jerid Messa, who perished after Kamille Bidan sent him flying into the remains of the Radish, causing it to explode. Yazan also killed Katz Kobayashi by causing him to crash into an asteroid and fatally injured Emma Sheen by delivering the final blow to the PMX-001 Palace Athene and sending debris flying everywhere. The Palace Athene was formerly piloted by another fellow Titan named Reccoa Londe, who was last seen inside the suit before Emma drove her beam saber into the cockpit; it is not made clear whether Reccoa was dead or alive when Yazan finally destroyed her suit. Regardless, Yazan's ruthless actions angered Kamille Bidan and prompted him to tap into his Newtype abilities in order to defeat Yazan by destroying his Hambrabi. However, Yazan escapes by ejecting in his escape pod.[3]

In the movie version of Zeta Gundam, Yazan betrayed and killed the leader of Titans, Bask Om during the Battle of Axis while the AEUG and Titans were engaging battles in Gryps 2 area.

Several days after the Battle of Gryps ended, Yazan's escape pod was recovered at Shangri-La Colony by Judau Ashta and his gang. Yazan then attempted and succeeded in persuading them into stealing the Zeta Gundam by infiltrating the Argama that was docked at the colony. Eventually, Judau and his friends turned on Yazan when they see him knock out Saegusa, they attack him while he was piloting a Petite Mobile Suit but he manages to escape.

Over the next several days Yazan made several attempts to steal the Zeta and failed each time, earning Judau his ire. In a final attempt to steal the Zeta and redeem himself, Yazan obtains a custom colored Geze and battles Judau in the Zeta Gundam as both him and the Argama attempt to leave Shangri-La. Yazan proves to have the upper hand until Judau manages to outmaneuver him and throw him into the Neo Zeon ship, Endra. In the end, the Zeta and the Argama escaped the colony while Yazan attempted to escape his mobile suit before it collided, by parachuting with a jacket, though the Neo Zeon soldiers believed him to have perished, even erecting a grave for him. However, it is revealed that he did survive, as he later resurfaces in a brief cameo attending a party with Neo Zeon and Federation personnel as a guest.

In the manga "MSV-R: The Return of Johnny Ridden," he appears as the captain of the Earth Federation Forces' MS squadron "Knight Jaeger" around the year 0090 of the Universal Century, under the pseudonym "Vasuki" (the name of Nagaraja, the king of the serpent gods in India). He is more intelligent than he was in "Zeta Gundam", takes good care of his subordinates, and acts as if he is polite to his superiors, but he also shows a side of him that is just as crazy about fighting as before, for example, he calls the pilot from the Chimera Squadron a "phantom beast" and enjoys fighting with him. He still retains his "beastly" characteristics with his unusual reactions, such as quickly evading a sniper shot from a distance. At the direct request of Chancellor Gopp, his superior during the One Year War, he accompanied Ingrid 0, who had become his adopted daughter, into space. Later, in the Confeito sector, he and the Led Wayline engaged in battle with Char Aznable by chance, and his custom RGM-79V GM Night Seeker suffered heavy damage. Afterwards, he expressed his disapproval of the RX-178 Gundam Mk-II that Gopp had arranged for him as a replacement, but reluctantly accepted it because of the urgency of the situation.

In January U.C. 0094, Yazan, weary of living life on Earth once again returns to Shangri-La, where it is said that he returned to being a bodyguard of a certain junk shop. It's said that he promised to give assistance to the Neo Zeon remnants uprising and went on a rampage there at the time. What became of the man who prowled, seeking battle like a beast is unknown. 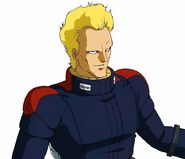 Yazan with Ramsus and Dunkel