The YMT-05 Hildolfr is an experimental mobile tank that appeared in the second episode of the OVA Mobile Suit Gundam MS IGLOO: The Hidden One Year War.

In U.C. 0072, the Principality of Zeon began development of a super-tank equipped with a nuclear fusion reactor and able to attack tactical targets such as armored fortresses or Big Tray-class land battleships. Since the miniaturization of the Minovsky fusion reactor was not yet complete, the unit was made much larger to accomodate the reactor. The result was the Hildolfr, which was completed in U.C. 0077.

Rather being called a Mobile Armor, it belongs to a category of its own, termed "Mobile Tank." As a tank, the YMT-05 Hildolfr is a mobile weapon designed for tactical artillery combat on Earth. Though having a relatively large and heavy frame, the tank is surprisingly fast and agile, and is equipped with a powerful 30 cm cannon that is capable of firing various projectile types with a maximum range of 32 kilometers. The power of the cannon is so great that the Hildolfr needs to be braced or else risk being knocked over by the sheer force of the shot's recoil. It is also equipped with multiple smoke dischargers.

The Hildolfr is capable of a partial transformation known as "Mobile Mode" where the fixed artillery turret is raised, revealing a mobile suit-style torso and manipulator arms. In this mode, the Hildolfr can use the arms to adequately wield MS weapons such as a Zaku-type machine guns. The Hildolfr can still use its main cannon, however, because of the placement of the armature locks, it can no longer be braced, thus it risks being keeled over by each shot. The locks can still be used as crude melee weapons to a limited degree. Overall, in this form, the Hildolfr is much like the Federation's RX-75 Guntank, only with slightly less secondary firepower and stability, though with greater range as the torso can pivot independently of the main body giving it ample dexterity even in a close quarters battle.

The main weapon of the YMT-05 Hildolfr is a large 30cm cannon that can fire various types of projectiles at a range of 32 kilometers. The cannon is mounted atop the main body in tank mode and atop the mobile suit's torso. Because of the power of the main cannon, the Hildolfr must be braced with special shovel arms or else risk getting knocked over. This limits the cannon to safe use only in Tank Mode as the shovel arms cannot be used as a brace when in Mobile Mode. The Hildolfr's cannon is a standard battleship cannon, rather than a proprietary part.

The Hildolfr weapons is equipped with a 105mm Zaku-type machine gun which is a modified version of the one used by the MS-05B Zaku I. This gun is stored inside the main body when in tank mode and can only be used in mobile mode form. It gives the Hildolfr adequate mid to short range firepower to make up for situations where the 30cm cannon cannot, or is simply an inappropriate weapon to use.

The Hildolfr can utilize the 120mm machine gun, which is a standard weapon for MS-06 Zaku II type mobile suits. It is a shell firing gun that does not require energy to be used, however its effectiveness against heavy armor is very limited.

The shovel arms are used to brace the Hildolfr in tank mode, allowing the mobile weapon to safely use its powerful main cannon. When transformed the arms are situated on the mobile suit torso's back behind the shoulders. In this mode the arms can be manipulated to serve as bludgeoning weapons.

The smoke discharger is a defensive feature used to visually blind the opponent while their sensors are jammed by Minovsky particles. This allows the Hildolfr an opportunity to escape or to ambush the enemy.

Originally developed in 0072 U.C., the Hildolfr project was canceled in 0077 U.C. because data collected at the time was believed to be too unsatisfactory. During Zeon's invasion of Earth in 0079 U.C. the Hildolfr was once again brought out under the disposal of the 603 Technical Evaluation Unit and supervision of Engineering Lieutenant Oliver May. Though officially the tests of the Hildolfr were resuming in the light of its supposed "impending redeployment," in actuality there is no actual interest in data gathering, rather this is simply an attempt to reinforce the Zeon forces on Earth with any mobile weapon they had and it was expected to be abandoned after the "test".

Maj. Demeziere Sonnen, an accomplished artillery instructor, is assigned to pilot the Hidolfr over the course of its "testing." The testing was conducted on May 5, 0079 U.C. The tank was to be brought first to the 67th Supply Depot in Arizona by a Komusai piloted by none other than Lt. May and Special Operations Captain Monique Cadillac. While in transit the Komusai is attacked by Federation forces that had earlier launched a successful surprise attack on the depot where the enemy squad led by LTC Federico Czariano commandeers a group of MS units stationed at the depot. At the urging of Maj. Sonnen, the Hildolfr is dropped quickly onto the ground so that it can sortie against the enemy who are using six stolen MS-06J Zaku IIs and two Type 61 tanks. With the Hildolfr's long range cannon, Sonnen soon makes short work of two Zaku units before the Federation forces realize that they were dealing with a single highly mobile artillery platform. Since the mobile tank's fire control systems were yet to be calibrated after a field test, May puts faith in Sonnen's combat experience to make the necessary calibrations to the firing systems. The Hildolfr soon loses audio communications (sustained from minor damage due to enemy tank bombardment) with the observation team at the Komusai and becomes engulfed in a pitched battle between the four remaining Zakus and two tanks in which the Hidolfr's fearsome potential is brought out by Sonnen. A frustrated Lt. May is forced to observe the battle as he can no longer advise Maj. Sonnen on the battlefield. In the hands of the right pilot, the Zeon tank is able to utilize its array of different projectile types as well as adapt almost instantaneously to melee combat. The major is able to defeat all of the enemy targets at the cost of his own life. The Hildolfr was heavily-damaged in this engagement but its black box survived intact as well as all of the invaluable data. Lt. May was hopeful that the data acquired would overturn the pending decision to scrap the Hildolfr project. However no new Hildolfrs are seen during the war, though it is possible that, due to similarities in upper-torso design, the combat data from the Hildolfr was put into the creation of the YMS-16M Xamel, another Zeon artillery platform.

The Hildolfr's remains languished in the Arizona desert for months, as they were deemed "too difficult to retrieve". In November of UC 0079, the loss of Odessa's mining operations prompted North American Zeon units to place greater emphasis on salvaging lost material, leading to Mia Brinkman uncovering May's technical report and suggesting it as a target for a salvage mission. The Hlldolfr would then be salvaged by Zeon's Noisy Fairy Squadron after a battle with Federation patrols in the area, and it's parts - particularly it's main gun - would be used to develop the MS-09 Dom Gnomides. 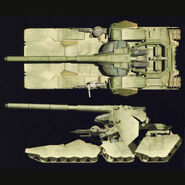 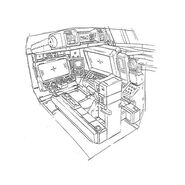 Hildofr (Tank Mode) being stored inside the Komusai shuttle (from MS IGLOO: The Hidden One Year War OVA)

Hildolfr (left) as featured in Bonds of the Battlefield 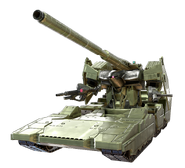 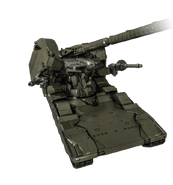 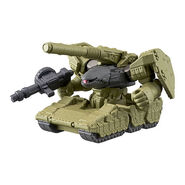