The YMS-16M Xamel is a prototype long-range support mobile suit introduced in the Mobile Suit Gundam 0083: Stardust Memory OVA. It was developed by the Principality of Zeon and used by the Delaz Fleet.

Designed late during One Year War, the YMS-16M Xamel was the first true heavy artillery mobile suit, designed to operate as a mobile artillery gun battery. Equipped with a powerful hovercraft/hover-jet system in its legs and massive skirt armor, it could skim along the ground at high speed, giving it the ability to fire, move to another location, set up and fire again without giving away its position too easily. Its primary armament was its long-barreled 680mm cannon, which could be folded up for transport when not in use. It also mounted a missile launcher pod for medium-range fire, but its close-combat abilities were extremely limited, with only a pair of almost useless arms and a 20mm vulcan gun turret mounted in the head. The Xamel also featured a tandem-seat cockpit, crewed by a pilot and a gunner. The shape of its upper body and head is similar to the YMT-05 Hildolfr, another Zeon artillery platform.

Xamel's main weapon, this massive weapon unfolds its huge barrel by flipping and lowering it to attach to the breach of the gun, then three clamps mounted to the breach's mouth close locking the barrel into place, and the sighting and targeting optic's slide into place on the top of the breach just behind the massive blast shield. This weapon is capable of destroying a target at any range with extreme effectiveness. It is capable of direct and indirect fire, as it is mounted on a 360 degree turret and with a barrel elevation and depression of +75 and -30 degrees, making it perfect for heavy artillery or anti-sniper roles.

The gun operates as a blow-back semi-auto cannon much the same way as a handgun: the round is fired and excess gas is carried back to the breach pushing the massive outer slide body of the breach backwards, to which eject the empty shell casing out of the bottom rear of the slide, all the while resetting the massive inverted firing pin, then the rest of the gas is released out of vents in the rear of the gun to cancel its massive recoil, and the slide then is pushed back into place by a high pressure hydraulic pistons, in turn chambering a fresh new round. The process repeats itself each time the weapon is fired, until all ammo is expended. The loading system to feed the gun is an advanced version used on the YMT-05 Hildolfr, which was the test bed for the heavy cannon auto-load system. They turned out to be a complete success and so this MS is capable of constant firing of its main gun with little consequence other than ammo.

It is equipped with its own Fire-control system (FCS) and sighting system as back up to the main and to allow independent use from the main systems, meaning while the pilot flies the unit the gunner can use the cannon, which means the unit can move and shoot at will making it a fierce opponent to fight.

The rear armored skirt to which this weapon is mounted to is the location of its ammo supply: a closed feed system leading to a single massive magazine containing 28-rounds plus the one in the breach's chamber, thus making 29 rounds in total ammo count.

The weapon is designed to fold to take up less space when the suit is needed to be transported by other units, such as a H.L.V. or Gaw. A side benefit of the weapon fold function is a high degree of flexibility and freedom of movement, and it also allows the folding left shoulder missile rack to be used unhindered by the massive cannon.

A 20mm seven barrel vulcan cannon, similar in design to the real life GAU-8 Avenger. It holds a capacity for 4,890 rounds and is kept in a gimbal styled turret, located on the right side of the upper body just near the head. It can use many types of ammo ranging from AP to HE. It has its own sighting system and FCS as back up to the main and can be used independently from the pilot by the gunner if he chooses to use it. It is fed by a closed link feed system from four ammunition drum's in its body allowing four types of ammo to be carried and used in battle.

The Xamel has a 8-tube folding missile launcher rack, it has an 8-round magazine for each tube, with the diameter being 360mm. The launcher folds horizontally on its back when not in use or to allow the deployed cannon freedom of movement. When folded back in storage it is reloaded if needed by a auto-load system, much in the same way a rifle mag is swapped out. It has its own sights and FCS but they're only back ups for if the main system fails, as this weapon is fixed on the unit's forward viewpoint, meaning this is the only weapon system slaved to the pilots utter control - it is aimed by turning the suit itself.

It is designed to use sheathed ammo, which allows smaller types of missiles to be used through wearing a break away sleeve like casing. This functions in the exact way a APFSDS round works: the launcher spits the missile out with a high pressure launch system (like a torpedo) then the sleeve breaks off revealing the actual missile or missiles, which then ignite their engines and streak off to their designated targets. This unique feature allows the Xamel to salvage any ammo on the battlefield and stay effective in combat.

It is unknown exactly how many of these prototype units were produced, although one Xamel is known to have been used by Delaz Fleet forces in its "Operation Stardust" theft of a prototype RX-78GP02A Gundam "Physalis" from Earth Federation Forces in UC 0083, inflicting severe damage to Torrington Base in Australia. It later was destroyed by Lieutenant South Burning in his RGM-79C GM Type C when it was trying to cover for Anavel Gato so he could escape with the stolen Gundam. 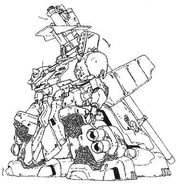 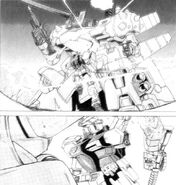 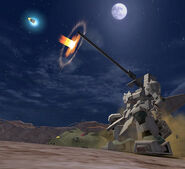 YMS-16M Xamel as seen on Mobile Ops: The One Year War video game 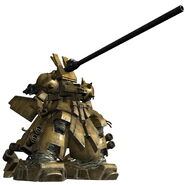 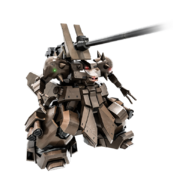 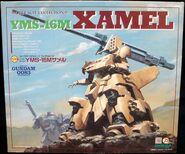 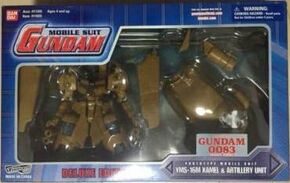 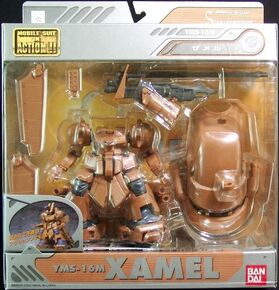 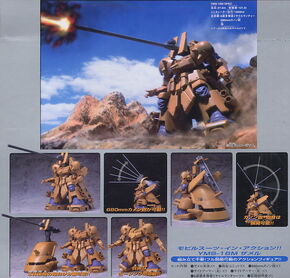 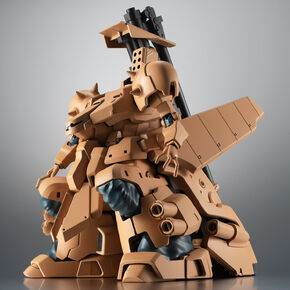 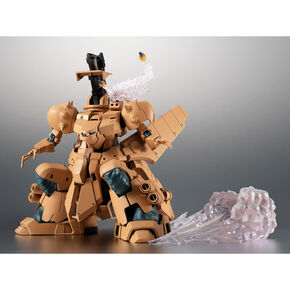