The YMS-15E Gyan Eos is a variant of the YMS-15 Gyan featured in MSV-R as well as MSV-R: The Return of Johnny Ridden manga series.

A modified version of the original YMS-15 Gyan jointly created by Zeonic and Zimmad, the Gyan Eos, named after the Greek goddess of dawn, was intended to be more suitable for actual combat. In order to improve its mobility in space, it was fitted with the same type of backpack as the MS-14B Gelgoog High Mobility Type. For increased firepower, it was armed with a prototype beam bayonet. It also featured a new shield.[1] Despite being modified for combat, its colors and decorations suggested that it was designed not only for battle, but also for ceremonial purposes. Due to its name, it was nicknamed "Knight of Dawn" by mobile suit pilots.[1]

The Gyan Eos' shield omitted the missile launchers of the original Gyan's shield, increasing its defensive capability in close combat. It was also made of new armor materials.[2]

An experimental, bayonet-type weapon designed for mid-close range combat. It has a beam sword generator at the tip and a small beam gun further down. Compared to the Gelgoog's beam rifle, it has lower power and a shorter range.[2]

The same bazooka used by the MS-09B Dom, it was used by the Federation Survey Service's refitted unit.

In December, U.C. 0079, the two units were unveiled to the Zeon public at Zum City as the Principality forces' latest mobile suit model during a speech by military officials. Both units were piloted, and it was considered unusual to unveil mobile suits at the capital, leading to the rumor that this was actually a precautionary measure against potential terrorist attacks.[1] There were records of the Gyan Eos participating in combat during the Battle of A Baoa Qu and shooting down a RGM-79SC GM Sniper Custom.[1] In addition, during the Battle of Solomon, two units belonging to Degwin Sodo Zabi's royal guard stopped the duel between Shin Matsunaga and Johnny Ridden in Side 3.[4]

In U.C. 0090, a unit belonging to the Federation Survey Service was piloted by Uma Lightning during the search for the Zanzibar-class mobile cruiser Sangre Azul. This unit was refitted with a panoramic cockpit and a linear seat. 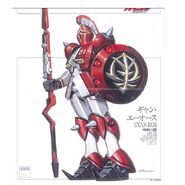 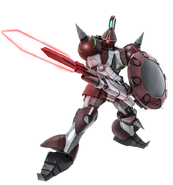