The YMS-09J Dom High Speed Experimental Type is a prototype high-speed ground combat mobile suit. It first appeared as a part of the side story design series MSV-R: The Return of Johnny Ridden.

The YMS-09J Dom is a high mobility prototype designed to improve the hovering performance of the MS-09B Dom. It features technology derived from the development data of the MS-07H Gouf Flight Test Type. It is equipped with a jet propulsion backpack with movable stabilizers and built-in thrusters on the waist.

Designed for high speed combat, the Dom High Speed Experimental Type mounts the Heat Lancer, an innovative weapon based on the Heat Hawk, originally intended for use in the next generation of Zeonic weapons. Beam weapon technology removed the need for this new weapon.

A beam weapon mounted on the left side of the Dom's chest. While the scattering beam gun is unable to damage enemy units, it does produce a bright flash capable of blinding human eyes and visual sensors momentarily.

A experimental, collapsible heat-based polearm weapon that is designed to replace the Heat Hawk of the older generation Zeonic Mobile Suits. Originally intended to be used in the next generation of heavy Zeonic Mobile Suits to increase melee combat range, it was removed in the designs because Zeon started the development of beam weapons.

Unit 1 was wrecked when it overturned during an experiment due to body balance issues. Unit 2 was equipped with leg-mounted air brakes and extended stabilizers to address these problems. As a result of these improvements, the Dom High Mobility Prototype achieved a 140% increase in maximum speed compared to the standard Dom.

Experiments were mainly conducted in Northern Europe, with nine units being produced and deployed without being formally adopted due to the intensified fight in the European front. After the end of the One Year War, a single desert-camouflaged unit was confirmed to be operated by the African Liberation Front. 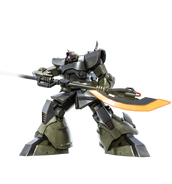