During the early days of mobile suit development at Zimmad, several experimental machines including the YMS-08B Dom Test Type were produced based on Zeonic mobile suit designs [1]. Two models sharing the same model number, "YMS-08B", were created. The space combat specification was based on the MS-06RD-4 Zaku High Mobility Test Type and a ground combat configuration based on the MS-07C-5 Gouf Test Prototype [1]. The Dom Test Type models would lead to the development of the MS-09B Dom and MS-09R Rick Dom[1].

The suit was equipped with a cross-shaped monoeye, a heat saber, and thermal jet engines for hovering capabilities [2]. These equipment would become standard in later Dom mobile suits [2]. For operational testing the Dom Test Type was armed with a large Beam Bazooka that featured a built-in generator, however, due to difficulty with firing performance it was never officially adopted[1].

Zimmad, which demonstrated high technical capabilities in the development of engine technology, under took development of self-designed mobile suits during its consignment production of Zeonic's MS-06 Zaku II and Gouf[2]. 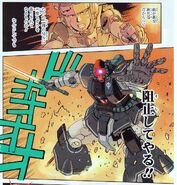