The YMS-07A Prototype Gouf is a mobile suit from the Mobile Suit Variations design series.

The Prototype Gouf was designed from Zeonic's MS-06J Zaku II Ground Type. Its design emphasized Earth-based ground combats and close-quarter MS combats, as reflected with a pair of new, large-spiked shoulder pauldrons. As a prototype, it was only armed with the standard Zaku's 120mm machine gun. The Prototype Gouf presented a great improvement over the J-Type. It was then upgraded into MS-07A Gouf; and finally the mass production type, MS-07B Gouf.

A basic arm-mounted defense armament for many mobile suits. The shield is a thick sheet of armor designed to take severe punishments that would normally destroy a mobile suit. Typically, physical shields can only take so much damage before they succumb to the pressure and break.

The Gouf was designed to be the successor to the MS-06J Zaku II Ground Type mobile suit. The Zeonic Company engineers worked hard to produce their superior ground-combat-use mobile suit to replace the older J-Type Zaku II.

The Prototype Gouf was just a redesigned and improved upon Zaku II, lighter due to more efficient use of equipment and space, and more maneuverable than the typical F-Type Zaku II. The Prototype Gouf was also supposed to be built with a 5-barreled 75mm machine gun hand and tentacle-like heat rod built into the forearm. However, these weapons were not ready until the second prototype, the YMS-07B Prototype Gouf, was finished. The B-Type Prototype Gouf also featured extra thrusters built into the legs to provide powerful, jet assisted jumps and improved maneuverability. The YMS-07B was nearly identical to the mass production version of the Gouf known as the MS-07B Gouf. 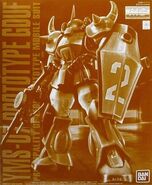 Retrieved from "https://gundam.fandom.com/wiki/YMS-07A_Prototype_Gouf?oldid=454609"
Community content is available under CC-BY-SA unless otherwise noted.