The YMAG-X7F Gells-Ghe is a Mobile Armor in the anime series Mobile Suit Gundam SEED Destiny.

The Gells-Ghe is the second large mobile armor used by the Earth Alliance during the second war. Like the YMAF-X6BD Zamza-Zah, it is operated by a crew of three, can be used on earth or in space, has atmospheric flight capabilities and can deploy a positron reflector shield that can deflect nearly any attack. However unlike the Zamza-Zah, the positron reflector shield is mounted on the front for easier use and as a result, it is often used to defend important bases. The Gells-Ghe's unique structure of combining an insect-like main body with the torso of a modified GAT-01 Strike Dagger allows it to walk on irregular or difficult terrain easily while maintaining the versatility of a MS. The MA's six legs are folded up during flight mode. The armament of the Gells-Ghe consists of a pair of 75mm CIWS mounted in the head, two handheld beam rifles, two leg-mounted beam cannons and a dual 125mm smoothbore cannon mounted on the rear of the mobile armor.

Mounted in the Gells-Ghe's head is a pair of "Igelstellung" CIWS, these light projectile weapons are capable of rapid fire and is normally used to shoot down missiles and other weakly armored targets.

A beam cannon is mounted in each of the pincer-like front legs of the Gells-Ghe, they can easily destroy a MS in one hit and provide the MA with additional weapons during frontal assault.

Mounted on the rear of the mobile armor, these shell-firing cannons are stronger than the CIWS and help to defend the MA against attacks from the back.

The positron reflector shield is a powerful energy shield that is strong enough to deflect a positron cannon blast. Unlike its predecessor the Zamza-Zah, the shield is jointly generated by the three emitters located on both shoulders of the MS part and lower body, all readily facing foward, effectively reducing the time to deploy the shield without needing to reposition its whole body.

A handheld ranged beam weaponry, it is derived from the Strike Dagger's beam rifle and serve as the Gells-Ghe's main weapon. The MA is usually seen dual-wielding the beam rifles, with one M7045/F beam rifle in each hand.

Another mobile armor created by Adukurf Mechano-Industries for the Earth Alliance. The first known Gells-Ghe unit was deployed in CE 73 to protect the Lohengrin Gate fortification in the Gulnahan Ravine, east of Suez. It was instrumental in thwarting ZAFT's first attack on the base, but the second attack, reinforced by the battleship Minerva, was successful when ZGMF-X23S Saviour pilot Athrun Zala disabled the mobile armor, allowing Shinn Asuka in the ZGMF-X56S Impulse to destroy the Lohengrin Gate.

Months later, two more Gells-Ghes were deployed to defend the Daedalus lunar base, with one unit being able to protect the base from a blast from the Minerva's Positron Blaster Cannon. The two units are eventually destroyed by the Minerva's mobile suits. Later, several Gell-Ghes joined forces with the Three Ships Alliance during the Battle of Messiah. 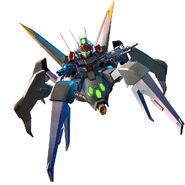 Retrieved from "https://gundam.fandom.com/wiki/YMAG-X7F_Gells-Ghe?oldid=445514"
Community content is available under CC-BY-SA unless otherwise noted.