The YG-111 Gundam G-Self Space Pack is a mobile suit featured in the anime Gundam Reconguista in G. It was briefly piloted by Aida Surugan but its main pilot is Bellri Zenam.

A basic weapon mounted in the forehead. They can shoot beams at a rapid rate.

G-Self has a pair of beam sabers stored near its shoulders. It can spin them fast for defensive purposes.

G-Self actually uses two models of beam rifle in the story. The original one made by Towasanga and new one made by Amerian Army. The Towasanga's model is more powerful, but the Amerian model is easier to maintain.

G-Self uses three models of shield in the story. The original one made by Towasanga, another one made by Amerian Army, and the third made by Venus Globe along with the Perfect Pack. Although Amerian model is cheaper, Towasangan model has built-in vulcan guns,[2] sliding beam absorbing reflectors,[3] and is capable of generating a photon shield to protect allies.[4]

Built by Amerian Army, the space pack are simple boosters to improve G-Self's mobility in space.

In catapult (From The Past To The Future)

Face close up (From The Past To The Future)

Close up (From The Past To The Future)

With Beam Saber (From The Past To The Future) 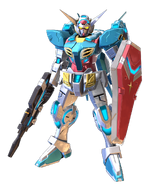 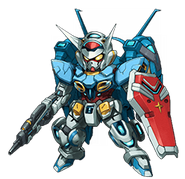 Retrieved from "https://gundam.fandom.com/wiki/YG-111_Gundam_G-Self_Space_Pack?oldid=447247"
Community content is available under CC-BY-SA unless otherwise noted.