The YAMS-132 Rozen Zulu (ローゼン・ズール, Rōzen Zūru?) is a mobile suit featured in the Mobile Suit Gundam Unicorn novel, its OVA adaptation and the television re-cut. The unit was piloted by Angelo Sauper during the Third Neo Zeon War.

The Rozen Zulu is based on the concept of the experimental mobile suit AMX-103 Hamma Hamma and was designed as an Anti-Psycommu warfare mobile suit. Like the Hamma Hamma, both of the Rozen Zulu's arms contain wire-guided weapons that function as INCOMs, the claws of the mobile suit are also part of the INCOMs and could be used as a melee weapon. To fulfill its anti-psycommu role, the suit is equipped with new petal-shaped remote control devices, the "Psyco Jammer", which disrupts the connection and function of enemy Psycommu-guided weapons. For defensive purposes, it carries a shield which has three built in mega particle cannons and an I-Field generator. This shield is later replaced by the wired shield unit that is mounted on the right arm to replace the destroyed arm-mounted INCOM. The Rozen Zulu is actually a heavily modified AMS-129 Geara Zulu using spare parts of the MSN-06S Sinanju. As a result, the suit has psycoframe installed around the cockpit but as it is not intended for Newtype use, the suit is also incorporated with quasi-psycommu system so that normal pilots can control the arm-mounted INCOMs effectively.

Mounted in the forearms, the pair of wire-guided devices is the main weaponry of the Rozen Zulu and each is equipped with triple mega particle cannons of adjustable output as well as three claws that can be used to pierce enemy units. Controlled by the quasi-psycommu system, each INCOM also has three relay INCOMs, thinner disc-shaped objects, that are used to help the main INCOM change direction during attacks.

A unique physical shield used by the Rozen Zulu, it is carried on the left forearm and has an independent generator to power its mega particle cannons.

Three mega particle cannons are mounted in the mega beam shield around the central I-Field Generator.

Besides improving the shield's defensive capabilities against beam weaponry, the I-Field generated can also be used to scatter the beams fired from the three mega particle cannons, increasing the attack area or to deflect the beams so that they can hit enemy units in other directions.

A unique feature of the Rozen Zulu which disrupts the connection and function of enemy Psycommu-guided weapons. Psyco jammers are stored in the two back containers and resemble rose buds that can expand to jam psycowaves. They function similarly to bits/funnels, except they are not equipped with offensive weaponry. However, they can generate an octahedral Psyco-Field around enemy units for capture/jamming purposes much like the Nu Gundam's Fin Funnel Barrier. It was particularly effective against the RX-0 Unicorn Gundam, a full-psyco-frame machine, and was used to inhibit the activation of its NT-D System.

To effectively control the forearm mounted INCOM, the Rozen Zulu has a Quasi-Psycommu System, which utilizes a mix of remote-control and computer-guidance systems to help remote weapons act like they're controlled by an actual Psycommu System.

Mounted on the back, the pair of tanks increase the amount of fuel the suit can carry, thus increasing its operational flight time. When the fuel is depleted, the tanks can be ejected to decrease mass.

The end of Rozen Zulu (episode 7) 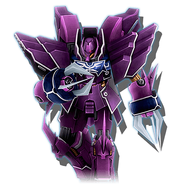 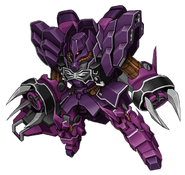 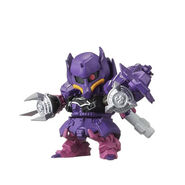 Retrieved from "https://gundam.fandom.com/wiki/YAMS-132_Rozen_Zulu?oldid=497253"
Community content is available under CC-BY-SA unless otherwise noted.