The YAMS-130 Krake Zulu is a mobile suit from the Mobile Suit Gundam Unicorn - Bande Dessinee manga series and UC-MSV.

The Krake Zulu is equipped with two mega beam cannons of adjustable output. Each of these are wire-guided and controlled by the Quasi-Psycommu System.

The standard firearm of the Geara Zulu, it rapid fires pellet-shaped beams and its firing and focusing rates are consistent with the standards at the time. By adjusting the irradiation time, the weapon can also function as a beam rifle. The magazine (E-pac) doubles as a foregrip, and has a banana shape, increasing the number of ammunition. It has an excellent basic design and high expandability.

The only close combat weapon of the Krake Zulu is a beam tomahawk, which is mounted on the rear skirt of the suit when not in use. The head of the beam tomahawk has two beam emitters, one on the side that emits the axe-blade, and the second on top that emits a beam spike that can be used for stabbing attacks.

The Krake Zulu could be equipped with two large propellant boosters. As its name implies, it is a combination of a large propellant tank and propulsion system that enhances the Krake Zulu's speed and mobility, and extends its endurance and operation time. These boosters were originally prototype optional equipment for the AMS-129 Geara Zulu. They were also featured as integral parts of NZ-666 Kshatriya Repaired.

A few Krake Zulus were produced by the Sleeves, with one unit painted in Angelo's purple color scheme. The Krake Zulu later became the basis for the YAMS-132 Rozen Zulu. 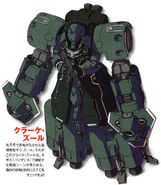