The xvx-ooo Gurdolin is a Vagan mobile suit from the Three Generation Arc of Mobile Suit Gundam AGE. It is piloted by Godom Tyneham.

The xvx-ooo Gurdolin is a prototype mobile suit and is the best example of the implementation of the "S&S" (Simplification & Streamlining) plan, a plan that pursues simplification of components, assembly, and efficient maintenance work, as a component of its design process.

Specialized for assault missions, the unfinished Gurdolin's only weapon is the beam scraper, a cone-shaped device on the front that can generate a spinning cone of beam energy. This 'beam drill' can be used for melee combat, to deflect or block incoming attacks, or launch as a powerful projectile. When needed, the Gurdolin can also use its larger than normal arms to rip apart opposing mobile suits or crush them with pure brute force. These arms are just an option part and can be replaced by other equipment depending on the situation. Additionally, the Gurdolin has an anti-beam coating and its egg-shaped main body also helps to further reduce damage from enemy's attacks. Both features allow it to survive several hits from a RGE-G2100C Clanche Custom's beam cannon without sustaining too much damage.

Outside of its various strengths, the Gurdolin has a number of weaknesses. For instance, despite its powerful acceleration thanks to its large thrusters, the Gurdolin's maneuverability is relatively poor. It also has a limited set of movement patterns, making it somewhat predictable after some observations. Finally, its beam scraper cannot be used in quick succession, giving enemies an opportunity to attack after it has been fired.

A green cone-shaped device located on the front of the machine, it generates a spinning cone of beam energy from its tip. This 'beam drill' can be used as a melee weapon, to deflect or block incoming enemy attacks, or fired as a large projectile that can destroy multiple enemy mobile suit in one shot. A weakness of the beam scraper is that it cannot fire consecutive shots, giving opponents a moment of opportunity.

A special coating on the Gurdolin's body that helps to negate beam attacks to a certain extent.

For the history of Gurdolin, please go to Godom Tyneham's page 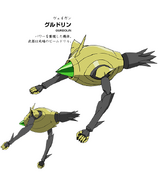 Close-up of the Gurdolin's hand, showing what appears to be a Beam Vulcan/Beam Saber on its palm

Gurdolin variants from the PSP game