The xvv-xcm Zedas M is the variant of the xvv-xcr Zedas R featured in the second generation of Mobile Suit Gundam AGE. There were eight Zedas M units that were piloted by Vagan's Magicians 8 X-Rounder Corps.

A machine used by the Magicians 8 that possess the same specs as the xvv-xcr Zedas R but with a different color scheme.[1] The Zedas M has retained the same armaments as Zedas R. Like the Zedas R, the Zedas M features the Electromagnetic Armor for defense against the Federation Forces' DODS rifle technology.

A small beam gun built into each palm, it has a high rate of fire and is capable of destroying mobile suits. Additionally, a beam saber can be emitted from the gun's muzzle for close combat. This is a common weapon for Vagan MS, and it also serves as a hardpoint for mounting the Zedas Sword.

A high-powered beam cannon built into the Zedas M's torso.

While normally serving as the Zedas M's "tail", it can be detached and used as a sword in close combat. It boasts higher cutting power than a beam saber. When in use, it is attached to the barrel of the palm's beam vulcan, and the base of the sword is movable to some extent.

The Invasion of Big Ring

Eight of these machines were deployed during the invasion of Big Ring, piloted by the Vagan's X-Rounder squadron, the Magicians 8. During the battle, they managed to destroy several Earth Federation mobile suits, until they were completely contained by Commander Flit Asuno's tactics and were forced to retreat.

The Battle Outside Solon City

Later, four Zedas M units were involved in the battle outside Solon City to assist Commander Zeheart/Zeydra and fought against Woolf Enneacle's team. However, during the battle, Gren Raize and Zel Brant were eventually killed when their Zedas Ms were destroyed by the new Gundam AGE-2 Double Bullet, forcing the two remaining Zedas M and Zeydra to retreat.

The Assault On Diva

Three Zedas M were involved in the assault on the Diva, led by Desil Galette, who was obsessed with getting revenge upon Flit Asuno. While Desil attempted to destroy the ship, Leo Louis's and Lessie Adonel's units were destroyed by the Gundam AGE-2 Double Bullet and the G-Bouncer respectively, forcing the Khronos and Mink Leiden's damaged Zedas M to withdraw from the area.

The four remaining Zedas M units participated in the battle of Nortrum. Zafar Rogue's and Ned Kahn's units were shot down by Woolf's G-Bouncer after Desil took control of them and had them restrain the AGE-2. Mink Leiden's Zedas M was destroyed during her attempt to destroy the Diva by the ship's Photon Blaster Cannon. The final Zedas M burned up during atmospheric re-entry, when Dole Frost used it to shield Zeheart's Zeydra, resulting in the complete destruction of the Magicians 8 and the end of Zedas M's operational use in the war. 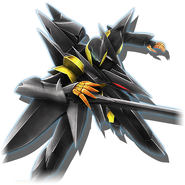