The xvt-rlc Ghirarga Custom is a variant of the xvt-zgc Ghirarga featured in the Three Generation Arc of Mobile Suit Gundam AGE. It is piloted by Leil Light.

After Zeheart Galette's xvt-zgc Ghirarga is heavily damaged during the Battle of Luna Base, Vagan engineers decide to repair the mobile suit for Leil Light's use because Zeheart obtains the xvm-fzc Gundam Legilis. The repaired Ghirarga is repainted in a green color scheme and re-designated as the Ghirarga Custom. The Ghirarga Custom retains all the armaments features and from the original unit. It is notable that the "Mode X" of the Ghirarga was not used by Leil during the Battle of La Gramis, the reason for this is that Leil is not an X-Rounder. Moreover, it is unknown if the Ghirarga Custom has any changes from the original unit, aside from the new paint scheme.

Mounted in the chest, this powerful beam cannon's destructive power exceeds that of a standard beam rifle and can destroy a few mobile suits in one shot. It was seen to be able to match the AGE-3 Gundam AGE-3 Normal's SigMaxiss Rifle and AGE-FX Gundam AGE-FX's Stungle Rifle.

Unlike most Vagan mobile suits, the Ghirarga's tail functions as a striking weapon similar to the Xvm-mzc Zeydalus. Additionally it can be hand-wielded as a whip.

The Ghirarga Bits are beam-like all-range remote weaponry controlled by X-Rounder brainwaves. These bits can quickly take down an mobile suit squad. This weapon is only usable if the Ghirarga is in the "Mode X" configuration.

The Ghirarga Spear is the versatile hand-held weapon of the Ghirarga. It is able to generate a beam sickle from the tips of both ends and can also be separated into two components capable of generating a beam blade. Additionally, it can also function as a beam rifle for ranged combat.[1]

Mounted on the wings, elbows, and knees, the X-Transmitter is a special amplifier than enhances an X-Rounder's fighting potential. It also allows the mobile suit to use the Ghirarga Bits. The X-Transmitters are only present in the Ghirarga's "Mode X".

For more information on the Ghirarga Custom's history, go to Leil Light's page. 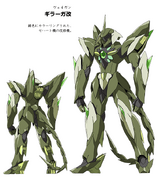