The xvm-zgc Zeydra is a Vagan mobile suit from the Second Generation of Mobile Suit Gundam AGE. It was piloted by Zeheart Galette.

The Zeydra is a new generation Vagan mobile suit that was designed with X-Rounder compatibility in mind.[1] Its completion signified a new milestone in X-Rounder mobile suit technology.[2] It also adapted the gravity-suitable mobility trait of the ovm-e Dorado, allowing it to move better under gravity.[2]

Its weaponry include Beam Vulcans/Beam Sabers, Beam Buster, Zeydra Gun and Zeydra Sword.[2] Overall, the Zeydra is a fast and agile machine that can match the AGE-2 Gundam AGE-2 Normal. Due to Zeheart Galette's X-Rounder capabilities, it can exceed its potential as a high speed commander unit. Its red color scheme is a reflection of Zeheart's personal color.[2]

Mounted in the chest, this powerful beam cannon's destructive power exceeds that of a standard beam rifle and can destroy a few mobile suits in one shot. It was seen to be able to match the AGE-2's Hyper DODS Rifle in terms of firepower.

Normally serves as the Zeydra's "tail", it can be detached and used as a physical sword in close combat.

A hand-carried beam gun wielded by the Zeydra. It has a moderate rate of fire and can generate a beam saber for close combat.

Preparing to fire its Beam Buster 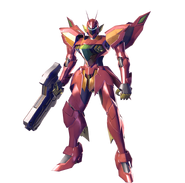 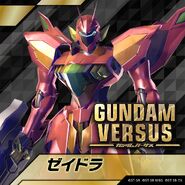 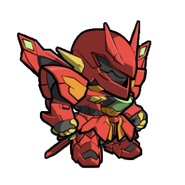