The xvm-zgc Jilsbain is a limited production variant of the xvm-zgc Zeydra, appearing in the Three Generation Arc of Mobile Suit Gundam AGE. It is piloted by Deen Anon.

Mounted in the chest, this powerful beam cannon's destructive power exceeds that of a standard beam rifle and can destroy a few mobile suits in one shot. It is based on the xvm-zgc Zeydra's Beam Buster.

Normally serves as the Jilsbain's "tail", it can be detached and used as a physical sword in close combat. It is based off the Zeydra Sword.

A hand-carried beam gun wielded by the Jilsbain, which is based off the Zeydra's beam gun. It has a moderate rate of fire and can generate a beam saber for close combat.

The Jilsbain was first seen deployed by the Vagan forces in A.G. 164 during the battle of La Gramis. This X-Rounder corps engaged in combat against both Captain Ash's forces and the Abis team during the course of the battle. 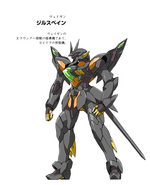 A Jilsbain with its beam saber 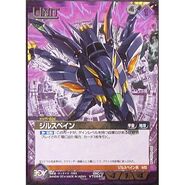 Retrieved from "https://gundam.fandom.com/wiki/Xvm-zgc_Jilsbain?oldid=497243"
Community content is available under CC-BY-SA unless otherwise noted.