The Gundam Legilis R is one of several development projects based on the xvm-fzc Gundam Legilis. This mobile suit was manufactured by the 8th R&D Group for the "Plan Assimilation" development program and designed to be the personal machine of Zeheart Galette.[1] The most prominent change of the Legilis R from the original Legilis is the adoption of an improved bit control system, the "Embed Bit System".[1] This system has enhanced operability and is integrated into the mobile suit's body, removing the need for a shield to generate the bits, resulting in improved maneuverability over the original Legilis.[1] The mobile suit also featured upgraded sensors and can resonate better with its X-Rounder pilot. The Legilis R is painted in Zeheart's personal red colors, and uses the Legilis Spear as its handheld weapon instead of a beam rifle.

A powerful, chest-mounted beam weapon that can destroy a few mobile suits in one shot.

A small beam gun built into each palm, it has a high rate of fire and is capable of destroying mobile suits. This is a common weapon for Vagan MS, and a beam saber can be emitted from the gun's muzzle for close combat. The output of the Legilis R's beam sabers can be increased when the mobile suit is operating at full power.

A handheld close combat weapon, it can emit beam blades from both ends. The Legilis Spear can pierce through enemy mobile suits when the Legilis R accelerates at high speed. Despite having similar appearance to the xvt-zgc Ghirarga's spear, it is unknown if the Legilis Spear can fire beam shots like the former.

An improved version of the bit control system used by the original Legilis, it is integrated into the Legilis R's body, removing the need for a shield to generate the bits, and has improved operability.

After the completion of the xvm-fzc Gundam Legilis, its development data was sent to the 23 research groups throughout Mars. The Vagans launched the "Plan Assimilation" development program to create more mobile suits of the same type as the Legilis, one of these being the 8th R&D Group's Gundam Legilis R.

Only one Legilis R was completed and was scheduled to be operated by Zeheart Galette as his personal machine. Although an investigation was carried out after the war, the unit was not found. In addition, the developer of the Legilis R testified that "operating tests were conducted on Mars in secret". Due to these facts, there have been rumors that the unit was hidden by Vagan militants. 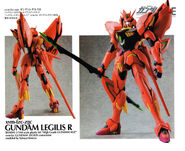