The xvm-dgc Khronos is a custom Vagan mobile suit that appears in the Asemu Arc of Mobile Suit Gundam AGE. It is piloted by Desil Galette.

The xvm-dgc Khronos is a next-generation Vagan X-Rounder mobile suit and is painted in Desil Galette's personal color. The sister machine of the xvm-zgc Zeydra, the Khronos has higher firepower and is specialized for bombardment.[1] It also has heavier armor on its legs, forearms and shoulders than the Zeydra. To compensate for the added weight caused by the armor, its thrusters have been enhanced, therefore the Khronos is still a highly mobile machine. It is armed with two Khronos Cannons, two Beam Vulcans/Beam Sabers, the Beam Buster and a handheld Khronos Gun.[2] The Khronos also has the ability to remote control other friendly mobile suits.[3]

Two large beam cannons mounted on the back. The base of each cannon is movable to some extent, giving it a wide firing angle.

A small beam gun built into each palm, it has a high rate of fire and is capable of destroying mobile suits. Additionally, a beam saber can be emitted from the gun's muzzle for close combat. This is a common weapon for Vagan MS, and it also serves as a hardpoint for mounting the Khronos Gun.

A five-barrel beam gatling gun held in the hand and connected to the beam vulcan's barrel. It boasts a high rate of fire to compensate for the Khronos Cannons' emphasis on single-shot power. The Khronos Gun can also emit a beam saber from its muzzle for close combat.

For the history of the Khronos, please see Desil Galette's page. 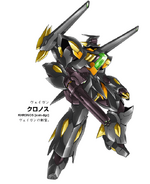 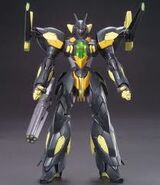